In the absence of rising wages, when mortgage interest rates go up, one of two things will happen: either sales will fall, or prices will fall.

I recently wrote that higher mortgage interest rates would either slow sales or cause house prices to drop. Since most real estate analysts still consider declining home prices impossible, when forced to pick between the two potential outcomes, they pick slower home sales.

Assuming a consistent payment, higher mortgage rates decrease the size of the loan and reduce the amount borrowers can bid on real estate. While it is possible the federal reserve may print enough money to spark wage inflation, given the high levels of residual unemployment and a low labor participation rate, wage inflation is a long way off, almost certain to come later than rising mortgage rates. Therefore, if rising mortgage rates results in smaller loan balances, then either sales volumes will go down, or house prices will go down, or perhaps some combination of both. This isn’t speculation; it’s basic math.

So which outcome seems more likely? If we had a free market without government and lender manipulation, prices would fall, perhaps precipitously depending on the market; however, we don’t have a free market, and our government, federal reserve, and a cartel of too-big-too-fail lenders are manipulating the housing market in an effort to drive up house prices. Since must-sell shadow inventory morphed into can’t-sell cloud inventory, I think it likely that home sales will be depressed for several years.

Apparently, analysts at Zillow agree with me.

So far that delicate handoff has been a dismal failure.

That is my assessment as well, and it directly contradicts the Pollyanna nonsense coming from most other housing analysts.

I don’t agree with this assessment.

I think it’s pretty clear fundamentals will not improve faster than rising mortgage rates hurt affordability. Wages are always the last thing to rise in any recovery, particularly with lingering high unemployment and a low labor participation rate representing a pent-up supply of discouraged workers.

Existing home sales have recovered slowly and have struggled to gain momentum over the past half-decade as the United States economy emerges from the Great Recession. Countervailing economic currents have pushed existing home sales in opposite directions. Low and declining interest rates—the result of extraordinary monetary policy actions—have been broadly supportive of home sales, but broader economic trends—including low homeownership and household formation, high unemployment and slow income growth—have been a net drag on home sales.

However, the economic forces driving existing home sales are in flux. The Federal Reserve has embarked on a gradual retreat from its accommodative monetary policies of recent years, starting with an incremental reduction in the pace of monthly purchases of government and mortgage-backed securities initiated in December 2013, and interest rates have climbed from their historic lows. These decisions were made in response to the expectation that economic growth and inflation are poised to strengthen in the near-term—contributing to higher wage growth, faster household formation, and eventually, to higher homeownership rates.

The looming handoff—as the underlying economic motor of home sales shifts from accommodative monetary policy toward more traditional macroeconomic fundamentals—is contributing to considerable uncertainty in housing markets. In particular, as the cyclical boost to home sales from low interest rates wanes, it is not obvious that income growth and household formation will pick up sufficiently (or sufficiently quickly) to offset the drag from monetary policy. …

I think it’s pretty obvious this handoff will not be an easy one. I expect several more years of depressed home sales.

What is currently constraining sales?

…  As the chart below illustrates, holding all else equal, historically low interest rates have boosted existing home sales by a total of about 15 percent – mostly directly but also indirectly by making it more attractive for mortgage holders to move or refinance at a lower interest rate. However, the boost has not been sufficient to overcome the drag from other factors, which have held existing home sales below their historical average. … 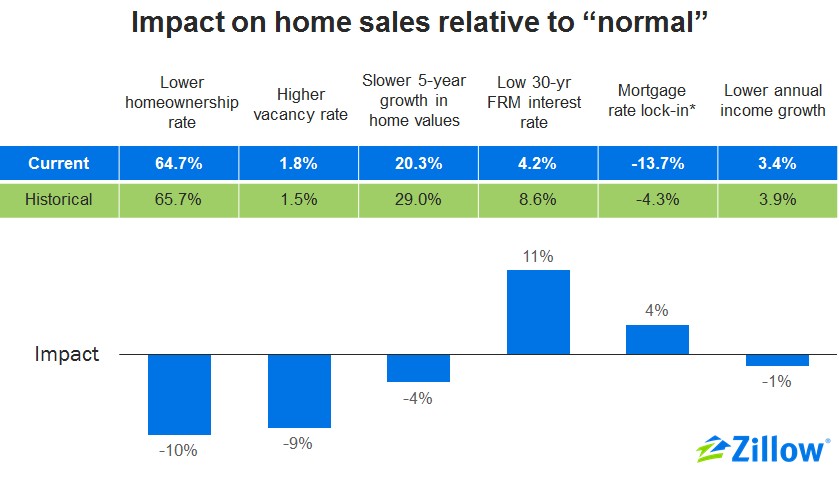 In other words, the only fundamental supporting current pricing and sales is low mortgage interest rates. 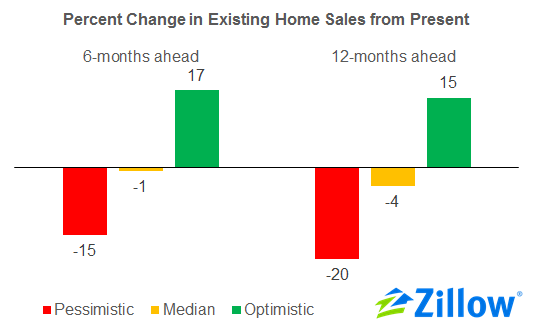 The broad range of outcomes projected by the model suggest that existing home sales are very likely to fall in the months ahead, even while existing home sales have increased strongly earlier this year. As the chart below illustrates, under the median scenario, existing home sales would essentially be flat over the next year. Under the pessimistic scenario, they would fall to levels comparable to levels observed during the worst months of the recession. 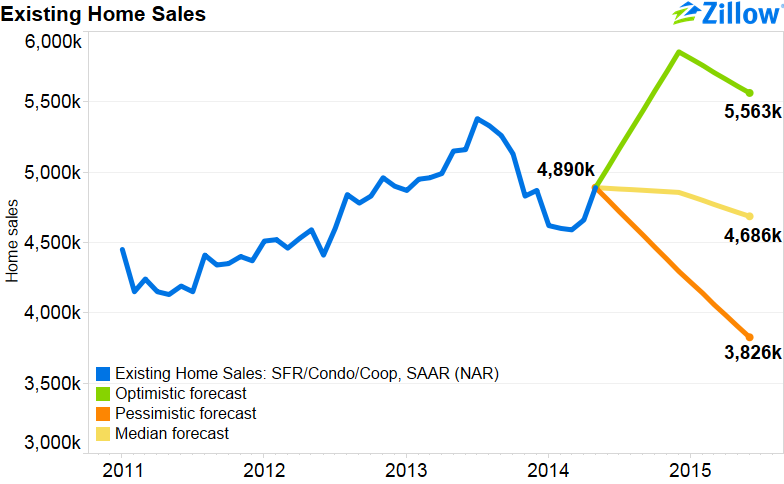 The analysis above suggests that as the underlying drivers of existing home sales shift from accommodative interest rates to more traditional fundamentals such as economic growth and household formation, the timing of the handoff is likely to be imperfect. Two competing perspectives on the monetary policy outlook hold broad implications for the trajectory of existing home sales.

In one view, interest rates will rise more rapidly than expected as the Fed withdraws from asset purchases, particularly since the Fed has been such a large portion of aggregate demand for Treasury and mortgage-backed securities in recent months. In this view, the Fed’s verbal commitments to maintain low interest rates for a protracted period of time will not prove credible, the jump in interest rates will hold back existing home sales, and mortgage rate lock-in will become an increasingly prominent challenge for housing markets. This view corresponds roughly to the pessimistic scenario described in the previous section.

I don’t side with the pessimists on this one. The only way mortgage interest rates will rise quickly is if the economy overheats, and that will boost underlying fundamentals making the pessimistic forecasts unlikely.

In a second view, interest rates will remain lower for a longer period of time than expected due to a structural shift in the equilibrium level of demand for credit (a perspective often labeled “secular stagnation”). If this viewpoint proves accurate, the historic relationship between interest rates and output will no longer hold and other variables would have to compensate as the stimulus from low interest rates wanes. This view corresponds roughly to the optimistic scenario described in the previous section.

I don’t think the optimistic scenario is likely either. We simply can’t push prices any higher and increase home sales without a dramatic increase in employment and wages. Nothing I’ve seen over the last several years, quarters, or months suggests that is going to happen.

Some studies suggest that there has been a structural shift in the equilibrium level of demand for credit and that, as a result, the interest rate corresponding to an economy operating at full capacity has shifted downward.

If interest rates and other variables remain at their current levels, median household income would have to grow by 4.2 percent over the year ending in June 2015 for existing home sales to remain at their current level—well above its historic average of 3.9 percent. That level of median family income growth would correspond to Personal Consumption Expenditure (PCE) growth of 2.6 percent, beyond the upper end of the Fed’s range of projections for 2015 (2.4 percent). Moving forward six months to the end of 2015, the five-year change in interest rates would fall to zero and median family income would have to grow by 4.8 percent over the year, which would correspond to annual PCE growth of 2.9 percent. Given the Fed’s current commitment to a PCE target of 2.0 percent, it is difficult to imagine that the Fed would tolerate this rate of PCE growth without raising the Federal Funds Rate.

While the “lower for longer” rates assumed under this scenario would be better for home sales since the five-year interest rate differential associated with mortgage rate lock-in would remain negative (i.e., rates would continue to be near or below their five-year earlier value), low rates would likely be associated with slower income growth, itself a drag on home sales.

Exactly. The only way mortgage rates remain very low is due to slow income growth and persistent unemployment, which I think is likely.

Overall, over the next year, the underlying drivers of housing markets will experience a delicate handoff. As the recession-era stimulus from low interest rates wanes—and eventually becomes a headwind—many hope that the historic drivers of existing home sales—such as income growth and household formation—will recover sufficiently quickly and sufficiently robustly to compensate. However, historic experience suggests that this outcome will be difficult to achieve.

I think they overlook the very real possibility of declining home prices brought about by lowered affordability, but overall a cogent analysis. Kudos to the Zillow team.