For the housing market to really improve, the fundamentals underpinning the market must improve because manipulating inventory and interest rates can only carry the market so far. The recent house price rally had little or no fundamental support; even housing bulls acknowledge that fact. Although housing bulls like to ignore or downplay the record lows in purchase mortgage originations, this is a sign of just how weak the housing market fundamentals really are.

What the housing market needs to get back on track is growth in jobs and incomes. People who get high paying jobs either form new households or make move-up trades, but the jobs created need to be of high quality. Creating low-paying or part-time jobs may pad the government stats, but they do little to stimulate the housing market. Although the job market has been steadily improving since early 2010, the rate of job growth has been relatively weak when compared to previous recessions, and the quality of these jobs has been suspect at best.

What the Jobs Report Means for Housing

… First, a little context. Two forces have driven the rebound in home prices that began more than two years ago: investors buying up bargain-priced homes — often foreclosures — and traditional owner-occupants taking advantage of ultralow mortgage rates after rates tumbled to record lows in 2012.

There’s little doubt that the housing market has cooled over the past six months as homes have grown less affordable, due in part to higher interest rates and home prices. Investors have also pulled back as rising prices make deals on homes less compelling.

If there is little doubt, why do realtors keep blaming the weather? (We all know they don’t want to acknowledge a negative truth.)

So getting back to our initial question, the key factor in picking up still more speed will be whether the housing market can hand off the baton to more traditional demand drivers in 2014. … 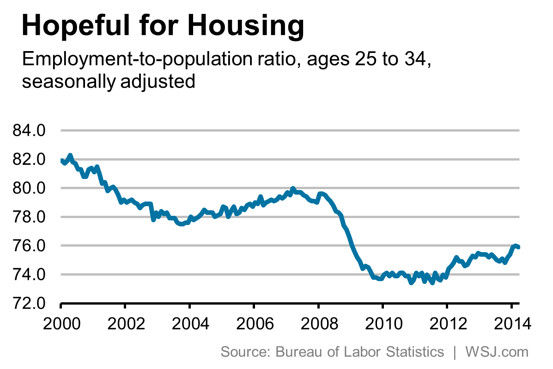 Notice the title of the graphic; housing still relies on “hope” rather than fundamentals. This graphic is supposed to show the recovery int employment-to-population ratio over the last 4 years, but when you look at the big picture, would you say the trend is up or down? (Hint: the big tilt is from upper left to lower right)

Having a job is everything for housing. Unlike the housing bubble when NINJA loans allowed the unemployed to buy houses, in today’s housing market, verifiable income from a real job is now the rule.

The report also showed that hourly earnings were unchanged in March, and earnings growth slowed from 2.2% to 2.1% on a year-over-year basis. Home prices can’t keep posting double-digit gains if wages don’t rise and if interest rates don’t fall, or they’ll eventually be out-of-whack (again) relative to incomes.

Prices are up; incomes are not.

Meanwhile, the unemployment rate for the U.S. construction industry fell in March to its lowest level since 2008, putting it back at levels seen in 2004, before the housing bubble inflated in earnest. 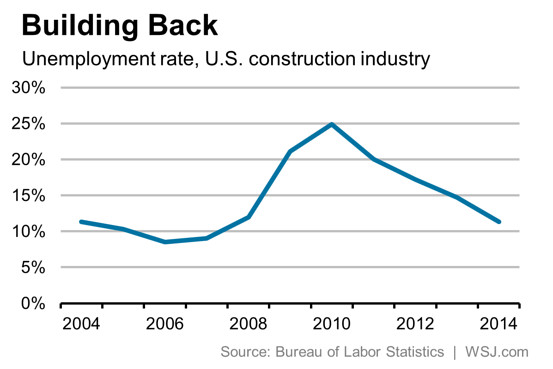 Construction industry employment is certainly improving, but it’s the professional support jobs that produce homebuyers, and those are only coming back slowly.

So how is employment doing overall? Are more people going back to work and preparing to buy homes?

If the chart above is right, why is unemployment still so high? Something must be missing.

Each month, The Hamilton Project examines the “jobs gap,” which is the number of jobs that the U.S. economy needs to create in order to return to pre-recession employment levels while also absorbing the people who enter the labor force each month.

I guess new people who also wanted jobs over the last six years too. Hoocoodanode?

Although we reached the level of employment previously reached just before the recession, we haven’t created jobs the new workers who entered the workforce over the last six years. That’s kept household formation down and explains part of the dismal purchase origination numbers.

So what is the weak jobs growth doing to wages?

CORPORATE profits are at their highest level in at least 85 years. Employee compensation is at the lowest level in 65 years. …

That can’t be a plus for housing.

The Commerce Department also said total wages and salaries last year amounted to $7.1 trillion, or 42.5 percent of the entire economy. That was down from 42.6 percent in 2012 and was lower than in any year previously measured.

Including the cost of employer-paid benefits, like health insurance and pensions, as well as the employer’s share of Social Security and Medicare contributions, the total cost of compensation was $8.9 trillion, or 52.7 percent of G.D.P., down from 53 percent in 2012 and the lowest level since 1948. …

Several reasons that have been offered as explanations for the declining share of national income going to workers, including the effects of globalization that have shifted some jobs to lower-paid overseas workers and the declining bargaining power of unions.

So what’s the right policy? Should we do as the Austrian economists suggest and do nothing, or should we continue printing money as Keynesians suggest to force the economy to improve? The Keynesian approach is in vogue today; the federal reserve embraces intervention, and politicians under pressure from a weary electorate supports the federal reserve. The Austrian economists will continue to point out the negative consequences of this policy, but the policy will go on for as long as it takes, and when the economy finally does improve, Keynesians will claim it was due to their meddling, true or otherwise.