The homebuilding industry’s increasingly desperate attempts to preserve the HMID

Like any industry that enjoys an undeserved government subsidy, the homebuilding industry is fighting to keep it. The home mortgage interest deduction does little to increase home ownership rates, particularly among low wage earners, but it does inflate housing prices, especially where high wage earners live. Homebuilders equate high house prices with greater profits and more homebuilding activity, so they are fighting to keep it despite the fact it is very costly to the US taxpayer and does little to boost home ownership rates.

Supporters of the home mortgage interest deduction are very worried that Congress will curtail it in the debate over comprehensive tax reform. The National Association of Homebuilders is becoming increasingly vocal — and increasingly desperate — in their attempts to justify this subsidy.

The mortgage interest deduction (MID) is linked positively with intergenerational mobility – a measure of economic opportunity – according to new academic research from economists at Harvard and Berkeley. This paper comes on the heels of separate research showing that trading the MID for lower individual income tax rates results in lower economic growth. The research is generally consistent with data and analysis assembled by NAHB examining the beneficiaries of the MID.

Both of these papers have spurious reasoning. The first finds correlation between the HMID and multi-generational success. This is more easily explained by the fact that high wage earners who take advantage of the HMID also populate better school districts and are more involved in their children’s education than lower wage earners. It’s a classic example of correlation that doesn’t come from causation. The second paper was commissioned by the NAHB to reach the biased conclusions they sought.

Among our findings, we have noted the importance of the housing tax incentives for younger homebuyers, aged 44 and below, who tend to be more credit constrained and are thus paying greater amounts of mortgage interest as a share of adjusted gross income (AGI). By reducing the after-tax cost of buying a home with a mortgage, the MID facilitates homeownership for a broader base of households and reduces the age of a typical first-time homebuyer.

This paper was another NAHB biased study. It attempts to show that lower wage earners benefit from the HMID by making housing more affordable. It ignores the obvious fact that without the HMID, house prices would be lower and house prices would be just as affordable. Any benefit gained by the HMID is directly offset by the higher prices it creates. What’s even worse is that the group this is supposed to benefit often doesn’t take the HMID because the benefit of the deduction doesn’t exceed the standard deduction.

Eliminating the MID would increase the cost of buying a home with a mortgage for most homebuyers, delaying or deferring homeownership for such households.

Again, this ignores the obvious. Eliminating would make houses less expensive and thereby decrease the cost of buying a home.

Cash buyers would benefit, but because the MID is not entirely capitalized into prices, buyers using a mortgage to finance their purchase are worse off as the after-tax cost of debt increases more than prices fall.

More nonsense. The HMID is completely capitalized into prices. Cash buyers are typically only 15% of the market, and until recently, they weren’t buying entry-level homes.

The NAHB research conclusions are reinforced by the academic paper cited above, which provides evidence that communities with taxpayers claiming larger MIDs as a share of AGI produce more economic opportunity by increasing the affordability of homeownership. The MID thus facilitates homeownership and economic mobility.

Since their research is bogus, so are their conclusions.

A better and more accurate view of the HMID comes from a recent editorial in the NY Times.

When people talk about “sacred cows” in the tax code, the deduction for mortgage interest is usually at the top of the list. But it is just one of many tax expenditures benefiting homeowners. Other important ones include the deduction for property taxes and low taxes on the gains from sales of primary residences.

The tax benefit on the sale of a primary residence is not often discussed, but it provides an added incentive for owner-occupants to act as flippers.

Individuals can exclude $250,000 and married couples can exclude the first $500,000 on the gain on the sale of a primary residence. This deduction makes sense for long-term owners who would otherwise be paying tax on inflation, but in areas like California where prices are volatile, it encourages people to sell when they near their exclusion amount, and it allows an unneeded break for those who make a windfall due to fortunate timing.

Contrary to popular belief, the mortgage interest deduction wasn’t adopted to encourage home ownership. The original income tax enacted in 1913 allowed a deduction for all interest on the theory that it was largely business-oriented. …

The spread of income taxes made the middle class much more interested in finding deductions to reduce their tax liability, and the mortgage interest deduction was one that was easily available. It helped fuel a rise in the home ownership rate to 55 percent by 1950 and 62 percent in 1960. It’s now 66 percent.

Although the HMID was not passed to encourage home ownership, at this point, it is the main argument used to keep it in place. Like many policies, it no longer fulfills its original purpose, but those that benefit from it find other reasons to support it.

While the rising percentage of Americans owning a home has paralleled the broadening of the income tax, there is surprisingly little hard evidence that the mortgage interest deduction has encouraged home ownership. The Harvard economists Edward L. Glaeser and Jesse M. Shapiro have found that it has only a trivial impact.

A major reason is that the deduction has long been capitalized into the prices of homes. That is, home prices are higher than they would be without the deduction.

It is likely that if mortgage interest had never been deductible the home ownership rate would be similar to what it is today. Indeed, it might even be higher, according to research by the economists Matthew Chambers, Carlos Garriga and Donald E. Schlagenhauf. They contend that without deductibility tax rates could have been lower, which would have raised after-tax incomes, making it easier to afford a home. 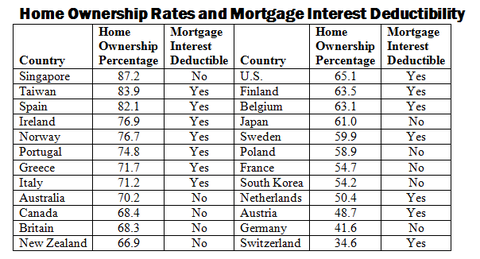 The table above clearly shows there is no correlation between the HMID and home ownership rates. Other factors have a greater impact than the HMID does.

Reformers have long asserted that there are negative social and economic consequences to the mortgage interest deduction insofar as it does increase home ownership. For example, it may encourage people to buy more expensive homes even if it doesn’t affect the rate of ownership. To the extent that the deduction encouraged greater indebtedness, it may have contributed to the recent financial crisis.

The video below sums up my comments…

As we know, a crucial problem has been that many homeowners found themselves “under water” as the value of their homes fell below the balance of their mortgages. A key contributor to excessive housing debt is the deductibility of home equity loans that can be used for personal consumption.

In the tax reform law of 1986, interest on credit cards and other personal consumption debt was no longer deductible. Lenders and borrowers found a loophole with mortgage equity withdrawal. People were allowed to refinance their homes and take out HELOCs and convert non-deductible personal consumption to deductible home mortgage debt. This loophole should be closed. The total amount of deductible home mortgage debt should be capped at 80% of the original purchase price of the home or $500,000 whichever is less.

Economists also assert that mortgage interest deductibility may have encouraged Americans to overinvest in housing at the expense of investments in stocks and bonds that would have led to more investment by businesses in plants, equipment, research and development and so on that would have raised productivity and wages.

I have documented how incredibly rewarded many California Ponzis were. Many people put little or nothing down and extracted hundreds of thousands of dollars from their properties. The more prudent borrowers also made these prodigious sums, but they still have the money. With the astronomical return on investment many people were making, it shouldn’t be surprising they under-invested in other asset classes.

They also suggest that excessive home ownership has made workers less mobile when the housing market is weak, unable to move to where jobs are more plentiful because they can’t sell their house for enough to cover their mortgage.

People are trapped in their underwater homes can’t move without taking a big loss or enduring trashed credit.

The principal constraint on any reform is that the mortgage interest deduction is very popular, according to every poll on the subject. Typical are a CBS News poll in December 2012 that found 62 percent of respondents opposed elimination of the mortgage interest deduction and a New York Times/CBS News poll in June 2011, which asked people how important the deduction is. An overwhelming 93 percent of people said it was (63 percent said “very” and 30 percent said “somewhat”).

I always find this result astonishing considering only about a third of taxpayers actually benefit from the HMID.

On the other hand, an October 2012 poll by the Pew Research Center for the People and the Press found that 47 percent of people would support limiting the mortgage interest deduction with 44 percent opposed.

The main argument for reforming the mortgage interest deduction is simple math – it is the second largest tax expenditure, reducing federal revenues by more than $100 billion. It will be harder to reduce tax rates if the deduction is declared off limits.

The cost of sustaining this subsidy is not warranted by the benefits, particularly since there are no real benefits from the HMID.

You read that right. The owner of today’s featured property extracted more than $2,500,000 in mortgage equity withdrawal.

This owner has had this property for so long that the original purchase doesn’t show up on my property records. Based on the taxable basis of $247,971, we can surmise he has owned it for a very long time. My records pick up with a $506,250 first mortgage on 5/6/1994.

This owner shows just how long people can sustain personal Ponzi schemes. After $3,000,000+ in mortgage equity withdrawal, lenders finally cut him off, but needless to say, he was very, very rewarded for owning this house.