Back in the early 1970s, Richard Nixon took America off the gold standard. It was a watershed moment in monetary policy the implications of which were not recognized at the time. As long as we were tied to a gold standard, theoretically, we could run out of money. We couldn’t spend any more money as a country than what we had in gold to back it up. Once we were off the gold standard we ceased to be a currency user, and the United States became a currency issuer. Unlike a household or an individual that can run out of money, a currency issuer can simply print more. The only restriction on a currency issuer is inflation. If they print too much money, it devalues it, and goods and services produced outside the economy of the currency issuer become much more expensive, and even those goods and services produced within the economy can rise in price if more currency is chasing after it.

Right now, the money being printed by the federal reserve is being offset by the destruction of currency through deleveraging. When deleveraging occurs and there is little or no asset value backing it, that money is permanently removed from circulation. Basically, it is unprinted. The huge amount of mortgage and credit card write offs the banks continue to perform are counteracting the inflationary effect of the federal reserve’s activity — for now. 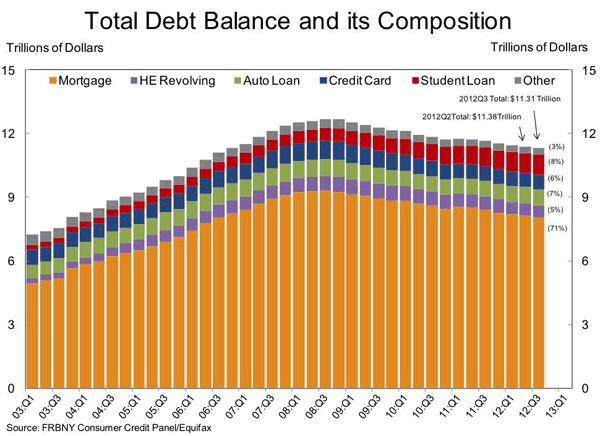 But what happens if the federal reserve continues to print money after deleveraging has hit bottom? Won’t all that extra money floating around the system inevitably result in price inflation?

The federal reserve is usually deliberately vague in its policy making in order to keep the flexibility to react to changing conditions. That’s why the new statements from Ben Bernanke pledging to print money until unemployment falls is so surprising, and unusual. If he sticks to his word — assuming he is still in charge in the future — we will have high inflation. It’s only a matter of when.

(Reuters) – The Federal Reserve, announcing a new round of monetary stimulus, took the unprecedented step on Wednesday of indicating interest rates would remain near zero until unemployment falls to at least 6.5 percent.

It was the latest in a series of unorthodox measures taken by central banks around the world as major economies face erratic, sub-par recoveries from the global financial crisis and recession of 2007-2009.

The chart of deleveraging above explains exactly why the economic recovery has been so weak. Consumers are paying down debt instead of buying goods and services. Or to be more accurate, the banks are writing down debt rather than giving new money to Ponzis who would blow it and stimulate consumer spending.

The Fed said it expects to hold rates steady until its new threshold on unemployment was reached as long as inflation does not threaten to break above 2.5 percent and inflation expectations are contained.

Well, which is it? If inflation rises before unemployment falls, what will the federal reserve do? I suspect they will keep the pedal to the metal and watch as inflation rises much higher than 2.5%.

Fed officials, who cut their forecasts for both economic growth and inflation next year, also replaced an expiring stimulus program with a fresh round of Treasury debt purchases.

“The committee remains concerned that, without sufficient policy accommodation, economic growth might not be strong enough to generate sustained improvement in labor market conditions,” the Fed’s policy-setting panel said in a statement at the close of a two-day meeting.

Fed officials committed to purchase $45 billion in longer-term Treasuries each month on top of the $40 billion per month in mortgage-backed bonds the U.S. central bank started buying in September. They also repeated a pledge to keep pumping money into the economy until the outlook for the labor market improves “substantially.”

The Fed will fund the new Treasury purchases with an expansion of its $2.8 trillion balance sheet. Under the “Operation Twist” program, the Fed bought an identical amount but paid for them with proceeds from sales and redemptions of short-term debt.

Some policymakers view actions that expand the Fed’s balance sheet as economically more potent than those that do not. However, Fed Chairman Ben Bernanke told a news conference that the stimulus would remain about the same, given that the central bank is still purchasing a combined $85 billion per month in longer-term securities.

I know this seems only tangentially related to real estate, but the federal reserve’s program of buying mortgage-backed securities is supporting our record-low interest rates. And as I pointed out yesterday, it’s these low interest rates that are sustaining the recent so-called market recovery. If the federal reserve changes its policies, house prices will be strongly effected.

We are blessed on this blog with many insightful commentators who share their insights in the comments each day. A recent comment by Carl Pham was relevant to today’s discussion, and I am sharing it with you here.

The ultimate result of all this monetizing of debt, both public and private, is just to inflate it away. That’s what’s always happened, since the time of Constantine.

The price of houses will not fall, or at least not fall precipitously. Debts, both public and private, will not prove onerous. But the prices of things other than houses and T-bills will rise steeply, and wages will not keep up. The net results will be that savings are destroyed — essentially looted to pay off debts, both your own and those of others — and the standard of living of most people declines. You won’t be underwater on your $650,000 house any more, and your salary will have risen to a handsome $100,000 — but milk and gasoline will be $18 a gallon, a decent shirt $300, and a quick meal at McDonald’s $25, so you’ll feel (and actually be) less well off than you were. That’s how the debt will be paid.

Unfortunately, the effect of inflation will not be borne evenly. Those wage earners whose salaries do not rise with inflation will be hurt most. They will see a dramatic decline in their standard of living as higher costs for goods and services eat into their meager paychecks.

And arguably it’s fair in the crudest sense. Essentially, we just pile all our debt in a big honking steaming mess, and then each of us is forced to choke down a roughly equal share of it. Obviously this sucks if you’ve been a careful saver, but if you have been you’re in the minority, and the thing about a democracy is the choices it makes usually benefit the majority, whether or not that makes moral or practical sense.

This is why the under-appreciated genius of the Founders is not that they figured out how to set up a democracy — how to do that has been obvious since ancient Greece — but that they figured out a way to set up a democracy with profound restrictions on the power of the majority, so that individual entrepreneurship and brilliance, always a rare flower, could not be prematurely plucked by a greedy and ignorant majority. It worked for a very long time. But for most Americans these days, a visceral fear of the majority and its clumsy whims or ignorant prejudices is no longer a daily occurrence. We have succeeded at the “melting pot” too well — we no longer fear our neighbor’s essential craziness. Instead of mutually agreeing with him to mind our own businesses, we attempt to build common cause with him (to screw over and steal the goodies of the neighbor down the block, or one street over).

We need more mutual distrust. We need to forget how to work together, and start working individually, and start wanting to be left the hell alone while we do.