In 2011, lenders aggressively pursued loan modifications to avoid foreclosures. They offered any deadbeat who would play along a sweetheart deal just to get some money back on otherwise non-performing loans. It beat the alternative of foreclosing on another property and selling it for a huge loss.

As this policy began working, the number of properties entering foreclosure began to drop considerably — the distress is still there, as the owner is unable or unwilling to make the contracted payment — but the negative results of this distress, delinquencies and foreclosures, were removed from the market. Some pundits have suggested this improvement comes from an improving economy and a lessening of financial distress among borrowers. That notion is complete and utter bullshit. Most of these Ponzi borrowers couldn’t afford the payments when times were good, and very few are better off today than they were 8 years ago.

Fewer foreclosures means fewer investor sales because only the presence of numerous foreclosures provided the right combination of price and inventory for investors to acquire significant numbers of single-family homes as rentals. As these foreclosures disappear from the market, so does the buying cohort for them. Many delusional financial reporters and housing market analysts predicted that 2014 would see a resurgence of owner-occupant buyers to take up the slack.  Unfortunately, weak job and wage growth hobbles housing, and the hoped-for owner-occupants haven’t materialized.

The Foreclosure Fade, and What it Means for the Housing Market

The U.S. housing market appears to be finding its footing after a sharp rise in mortgage rates last summer, on top of some big price gains, deflated sales.

The National Association of Realtors reported on Tuesday that sales of previously owned homes rose 2.6% in June to a seasonally adjusted annual rate of 5.04 million units. That’s the third straight monthly gain and the highest level since last October. 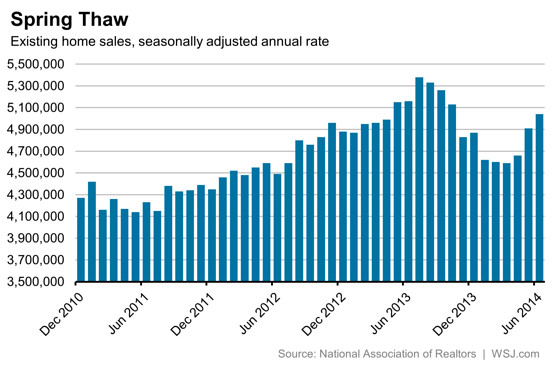 Is the recent bump really a sign of a market finding its footing, or is it the normal seasonal pattern in an otherwise awful year?

Housing became less affordable last summer after rates jumped from around 3.5% in May 2013 to 4.5% by July 2013. Since then, however, rates have drifted a little lower, and buyers and sellers have had time to readjust their expectations.

Rates have drifted more than a little lower; in fact, some banks dropped rates below 4%, putting rates well below where they were at this time last year. The sudden uptick in sales is largely explained by the increased affordability created by these low rates. When rates drift back up, sales will plummet once again.

Inventories of homes have stopped falling after several years of declines, but they haven’t risen much, either. 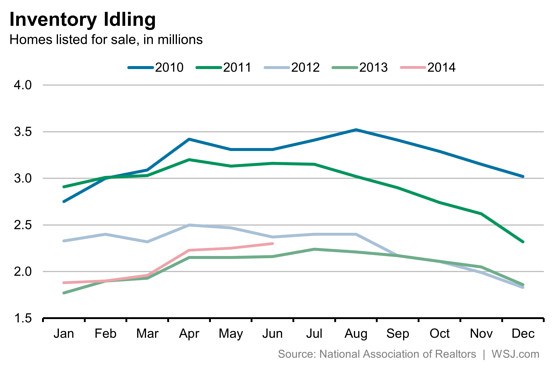 The supply coming to market is mostly cloud inventory priced to get the owner back above water. With such unrealistic pricing and no ability to lower it, most of this inventory doesn’t transact.

This has kept supply and demand fairly balanced, and it’s one reason why prices have continued to rise.

The Federal Housing Finance Agency said on Tuesday that home prices in May rose 0.4% from the prior month and were 5.5% above their level of May 2013. At June’s pace of sales, there was a 5.5 month supply of homes for sale. The Realtors’ group considers a 6-month supply to be a balanced market. Higher supplies favor buyers and lower supplies favor sellers. 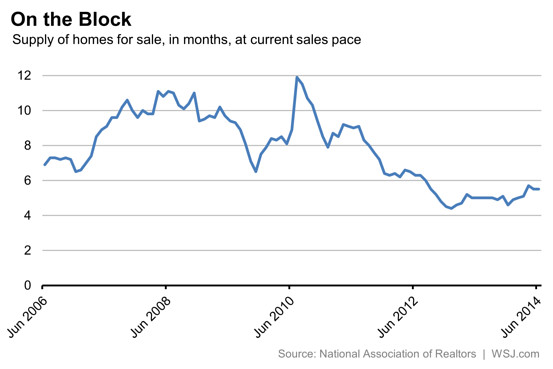 But there’s another important factor that explains the housing market dynamic right now: the foreclosure crisis has faded. This isn’t to say foreclosures are over, but so-called “distressed” sales accounted for just 11% of sales in June, down from 15% last year, 25% in 2012, and 30% in 2011.

Foreclosures tend to sell at lower prices than comparable homes because they’re not as well maintained, they’re often vacant and not staged, and banks are motivated to sell quickly. Prices plunged from 2008-11 as the supply of foreclosures rose, but prices rebounded in late 2011 as the share of foreclosed-property sales fell.

While total home sales stood 2.3% below the June 2013 level, most of that can be attributed to the falling share of foreclosures and other distressed sales. Distressed home sales fell by nearly 40% in June from last year, while non-distressed property sales rose 2.3%. 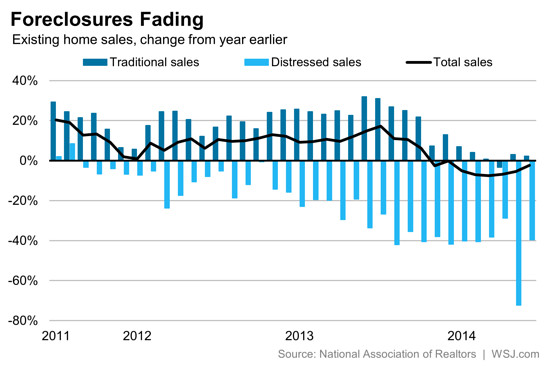 Take a good look at the chart above. The light blue lines representing a decrease in distressed sales, mostly to investors, was supposed to be balanced by the dark blue lines representing owner-occupant sales. The purchase of homes by owner-occupants has barely changed because higher prices are not affordable to marginal buyers, and with weak job and wage growth, there simply aren’t enough qualified buyers at today’s prices.

The foreclosure fade is great news for the housing market, as it means homeowners don’t have to compete with banks to sell homes–and eventually, builders will have to ramp up construction to satisfy new demand if job growth continues. (Even if young households aren’t ready to buy, they’ll have to live somewhere–paying rent, and driving new construction.)

The foreclosure fade is terrible news for the housing market, as it means fewer transactions overall, less money spent by flippers on rehab, and buyers must spend a larger percentage of their income on housing, crowding out other expenditures that would stimulate the economy.

But the foreclosure fade also helps explain the eye-popping gains in sales volumes and prices that we witnessed in 2013. These bargains generated frenzied bidding wars, both from investors and owner-occupant buyers, and they’re largely history. 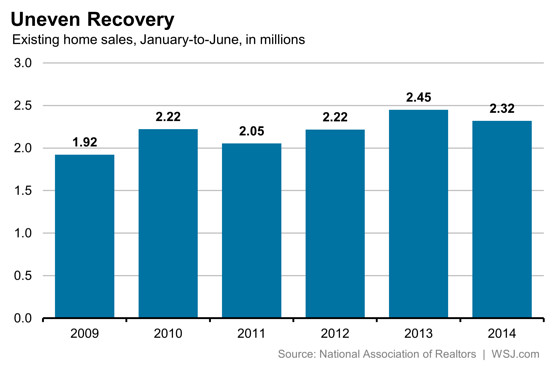 A true and durable recovery based on fundamentals should display both price and volume growth. We had that in 2013, but the lack of volume in 2014 reveals the recovery was not built on fundamentals but on temporary stimulus with investor buyers and record low rates.

Now, the housing market is going to rely more heavily on traditional drivers of growth, including job and wage gains and demographics. Tighter credit standards, higher levels of student debt, and lower incomes for young adults will keep pressure on homeownership, and they could make the housing recovery far bumpier than the steady gains of 2012-13 would have suggested.

It was only suggested by a hopeful financial media that the housing recovery was real and durable. The fact is the market is being continually manipulated to drive up prices to save the banks. As these artificial props give way to reality, the market will stumble, like it did in early 2014. We still don’t have an organic market dominated by individual buyers and sellers responding to strong job and wage growth. When we get there, if we get there, then we’ll have a real recovery.