In the prime of the home selling season, new home starts and existing home sales both retreated, a sign of ongoing weakness in the housing sector, if you are looking to sell then there are some brilliant estate agents with online prices like this one in Bristol so they are well worth a look.

Sales are not supposed to slump in May or June. The prime home selling season generally peaks in July before slowing to a seasonal low on December 31. The last time home sales hit a weak patch in the prime selling season was 2011 after the expiration of the tax credits pulled demand forward in 2010 and left the market bereft of buyers. Prices fell in 2011 and on into early 2012, but with the diminished MLS inventory, price declines are unlikely, but continuing slow sales is nearly certain.

Construction on new homes falls 6.5% in May and builders seek fewer permits 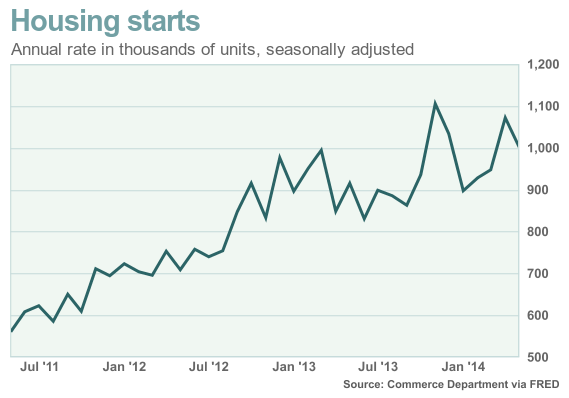 Based on the chart above, it looks like everything is trending upward nicely. If put in its full historic context, a more accurate picture of the activity emerges.

WASHINGTON (MarketWatch) — Construction on new U.S. homes fell by 6.5% in May and builders trimmed plans for future projects in another sign that a hoped-for spring revival in the housing market remains elusive.

Hoped-for is the right characterization. No objective reading of market conditions suggested any rebound was coming after the false weather excuse was offered up over the winter. Nobody reading this blog is surprised by the ongoing weakness.

Housing starts declined to an annual rate of 1 million units last month from 1.07 million in April, the Commerce Department reported Tuesday. The figures are seasonally adjusted.

What’s more, permits for new construction fell by 6.4% in May to a 991,000 annual pace, the slowest in fourth months. Permits are a sign of future intentions and reveal whether builders are optimistic.

The U.S. housing market has cooled off since late last year after a spike in home prices and an increase in mortgage rates from decades-low levels. Economists had expected construction to pick up once warmer weather arrived but so far there’s little evidence.

Economists got it wrong? What a shock… not.

“Housing starts have improved modestly over the past few years, but the recovery has been much slower than in previous business cycles,” economists at Wells Fargo wrote in a research note.

What’s also worrisome is the kind of homes being built. Construction on single-family homes in the first five months of this year is running slightly below 2013’s pace. Yet work on multi-unit dwellings such as apartments and townhouse complexes are about 13% higher.

It isn’t only new construction that’s showing weakness; existing home sales are off too.

If we are slowing down now at a rate well below 2013’s levels, overall sales for 2014 will be down considerably. We’ve seen this in the ongoing disappointment in purchase applications, and I see no reason this trend will reverse in the coming months. Perhaps the economy will improve and 2015 will be a better year, but it looks like 2014 will be a huge disappointment.

For those looking for good news, at least it’s not as bad here as it is in China…

Home sales in Beijing slumped 34.9% year on year in the first five months of the year, a sign of cooling in property sector.

Ssales of commercial buildings, which include residential and commerical property, fell 33.6% year on year to 4.54 million square meters, it said.

Sales of residential property in China fell 7.7% during the first quarter of 2014 to 1.1 trillion yuan (about US$175 billion). Month to month, home prices have been falling in more of the pool of 70 major cities surveyed by the National Bureau of Statistics.

China’s housing bubble is bursting. The only question now is what does it do to the world economy, and will it cause Chinese owners of US real estate to sell in order to repatriate their money to meet debt-service obligations at home.