If new mortgage rules will prevent housing bubbles, prudent fence-sitters have no urgency to buy for fear of being priced out of the housing market.

Fence-sitters are a group of potential homebuyers who for a variety of reasons are not ready to buy today — they are capable of buying, and they may plan to buy in the not-too-distant future, but for now, they are content to rent and watch the market. realtors take it as their mission in life to knock these people off the fence, create false urgency, and generate a real estate commission — today. realtors don’t concern themselves with whether or not fence-sitters are making the right choice for their families because they aren’t generating any income for realtors. If you need help building one, you can hire Splash Fences services. Go visit their website for more information.

Fence-sitters don’t buy for a number of reasons: they are unsure about their jobs, they want the flexibility to move, they worry about high house prices, they can’t find the right property, they just aren’t ready. In the past realtors were able to create false urgency by scaring fence-sitters with the possibility of being priced out of the real estate market forever. The housing bust appears to have rendered this bullshit realtor ploy permanently impotent.

In the past, there was a grain of truth in realtors fear-mongering about being priced out forever — it was possible to be priced out for a very long time. The housing market finds stability after a bust (it’s happened three times in California) by retreating to safe mortgage loan products like the 30-year fixed-rate mortgage. After the market stabilizes and begins to heat up, affordability becomes a problem, so lenders offer unstable affordability products like interest-only mortgage, adjustable-rate mortgages, and the most toxic of all, negative amortization mortgages. This goes on until lenders realize these unstable mortgage products cause borrowers to default, so credit tightens, prices crash, and the cycle begins all over again — at least until legislators passed the Dodd-Frank financial reform law and implemented new mortgage standards.

With new mortgage regulations in place preventing the proliferation of toxic mortgage products, buyers no longer need to fear being priced out. House prices stabilized at prices affordable by local incomes, and these prices won’t move higher unless incomes go up or mortgage rates go down. A buyer three years from now will be limited to putting 31% of their income toward housing costs just like they are today.

For me personally, caps on debt-to-income ratios and banned affordability products gives me peace-of-mind that the window of opportunity for home ownership under stable loan terms will not close again. It removes the false urgency from the market that used to force prudent buyers to participate only when lenders weren’t inflating another housing bubble. I think that’s a good thing. It’s a fifth trait of the new normal in the US housing market.

Bubble or not? A look at home prices compared to rent

One way to measure if home prices are in a bubble or not is to measure them against rents. After all, rents are to homes what cash flow is to stocks. Read Brett Arends column from January for more explanation on using this methodology.

And one way to do that is compare the S&P/Case-Shiller 20-city composite index to the owner’s equivalent rent in the consumer price index produced by the Labor Department. 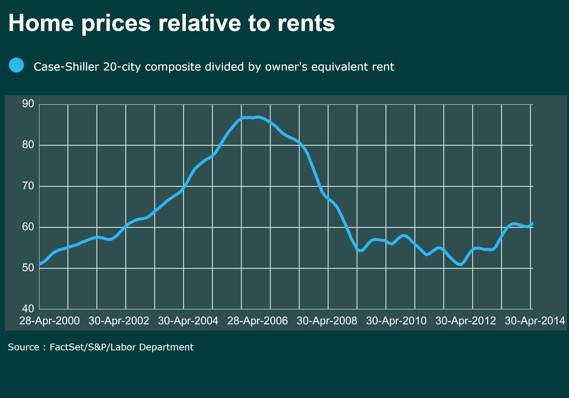 Obviously, I agree with this analysis.

Bubble Watch: Home Prices Still Undervalued, But Not For Much Longer

At this pace, home prices nationally should be in line with long-term fundamentals – i.e., neither over- or undervalued – by the last quarter of 2014 or the first quarter of 2015. The good news for bubblephobes is that price gains are now slowing down while prices still look (slightly) undervalued.

We’d be at greater risk of heading toward a bubble if price gains were still accelerating, but they’re not.

Even in the Bubbliest Markets, It’s Not 2006 All Over Again Eight of the 10 most overvalued housing markets are in California, with Orange County, Los Angeles, and Riverside-San Bernardino in the top four. However, they are not seeing the return of last decade’s bubble. These California markets are much less overvalued than they were at the height of the bubble. Orange County, today’s frothiest market, is just 17% overvalued now versus being 71% overvalued in 2006 Q1.

Trulia uses s different methodology than I do, and they show Orange County as overvalued whereas I show it at fair value. Either way, a crash is unlikely as housing inventory manipulation overrides all bearish predictions.