With stagnant wages, what will cause rents and home prices to rise?

Average hourly wages were unchanged from May to June after adjusting for inflation, the latest sign of households struggling to gain purchasing power in the aftermath of the Great Recession. 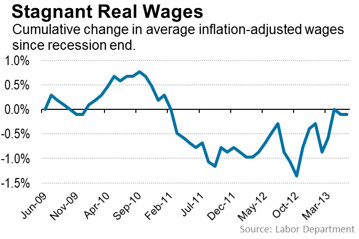 The flat result stemmed from a 0.4% increase in average hourly earnings being offset by a rise in the consumer price index. Over the last 12 months, inflation-adjusted hourly wages have risen by just 0.4%.

Given that the CPI readings on inflation has been tame, even nominal wages are growing very slowly. There’s a reason for that.

Standard economic models hold that wages should increase during times of economic recovery and falling unemployment. But new research from economists at the Federal Reserve Bank of San Francisco finds that normal wage models don’t apply during and after recessions.

The researchers examined data from the last three U.S. recessions and found that wages held steady or didn’t decline by very much, despite spikes in unemployment, during the downturns. Then, as the economy emerged from recession and unemployment fell, wages didn’t recover much either.

After the last recession, the fraction of U.S. workers whose wages were frozen reached a record high.

The researchers concluded that when companies lower their labor costs to adjust to declining output, they find it easier to lay off workers than to lower wages. Nevertheless, they typically fail to adjust labor costs as much as they think they need to during the downturn, so they continue the adjustment after the recovery takes hold by keeping a lid on wages.

The severity of the last recession means that the damping effects on wages are likely to continue for some time, the researchers said.

Apparently, if the magic appreciation fairy is to do her job, it won’t be because rising wages are pushing real estate values higher.

And the only reason they are that high is because flippers will bid up to values where they know they can turn them quickly for a profit. If financed buyers were entirely removed from the market, house prices would be much lower than they are now.

Financed buyers establish their bids based on their incomes and current interest rates. Low rates like we have today allow borrowers to greatly leverage their incomes and finance relatively large mortgage balances and bid up prices. The three key variables involved are income, interest rates and allowable debt-to-income ratios.

Rising interest rates reduce the buying power of prospective house shoppers because their incomes can’t be leveraged into large loans. The only way to offset the reduced borrowing power is to increase income or debt-to-income ratios. Lenders can’t increase debt-to-income ratios due the 31% cap on GSE loans that dominate the market and recent qualified mortgage rules that cap back-end debt-to-income ratios at 43%. This leaves only rising incomes to push prices higher, and as the article stated above, that won’t be happening any time soon.

Wage inflation does not cause housing bubbles

At some point, the pressure of an expanding economy and productivity growth will force employers to bid higher to obtain and retain key employees. That’s when wages rise. If the federal reserve prints enough money, they will stimulate the economy, and they will also likely stimulate a great deal of inflation.

The study quoted above points out that real wages — wages adjusted for inflation — are flat. If the federal reserve revs up the economy with printed money, real wages may still remain stagnant even as nominal wages rise significantly. Rising nominal wages will allow both renters and prospective homebuyers to raise their bids for real property, and depending on how bad inflation gets, both rents and house prices could rise at a very brisk pace. However, this would not be a bubble.

Real estate can serve as a hedge against wage inflation causing the general level of prices rising, but only if interest rates don’t go up even faster as the federal reserve raises rates to combat inflation. With the likelihood of stagnant wages and rising interest rates, the primary impetus to push prices higher will be effectively muted.

The former owners of today’s featured REO bought back in 1989. My records don’t go back that far, but based on the purchase price, their mortgage was probably around $140,000. They had no mortgage activity until 2006 when over a one year period they opened four different credit lines ranging from $188,000 to $255,000. The balance on the mortgage in first position ballooned to $296,000 when the property was foreclosed on last November.

Twenty-four years after buying the property, they lost it in foreclosure because they blew through several hundred thousand in HELOC money. Rather than enjoying a property that’s nearly paid off, they are now living in a rental with bad credit.

49 responses to “With stagnant wages, what will cause rents and home prices to rise?”