When will homebuilding really recover?

Assuming we don’t have another recession, homebuilding will take another two or three years to regain full strength.

I reported in 2012 that the same policies that served to eliminate distressed inventory from the MLS also served to revive homebuilding. Homebuilders provide must-sell inventory, so they need a vibrant resale market with a chronic lack of supply to sell into. A glut of foreclosures and weak demand is not a favorable set of circumstances for homebuilding.

At first low MLS inventory was a boon to homebuilders, but housing market manipulations give homebuilders false signals, so Orange County homebuilders oversupplied the market, and as it turned out, reflating the housing bubble hurts homebuilders, rather than helps them.

It wasn’t until early 2013 that homebuilding bounced off its five-year long malaise at 60-year lows. Homebuilding is still 40% below the average of the last 60 years, and with high prices and weak job growth, some are wondering when the industry will ever recover.

The housing recovery that never was

The home-building industry remains in a deep slump. Will it ever regain its past glory?

Much has been made of the housing recovery in recent years, but when pundits talk about the phenomenon, they often fail to define their terms.

Real estate has recovered in the sense that home prices have regained their pre-bubble levels. The real estate market on average is fairly priced once again,

Fairly priced? (See: Is the only meaningful sign of recovery higher home prices?)

but the home-building industry — the sector of the economy that fueled past recoveries and provides good-paying, middle-skilled jobs to blue-collar America — is still stuck in the doldrums.

This is one of the main reasons the recession persisted for so long. Homebuilding generally leads the US out of a recession, and increasing employment in homebuilding accelerates the recovery — except this time. (See: It’s a tough job market for SoCal real estate development professionals)

That fact was reinforced by data released Tuesday by the Commerce Department, showing that new home construction fell by 17% in February to a seasonally adjusted annual pace of 897,000 units.

The decline in housing starts dovetails with the index of homebuilder confidence released on Monday from the National Association of Homebuilders, which fell two points in March to 53, after declining in February as well. Analysts are quick to blame these troubling data on poor winter weather, but that explanation doesn’t really hold water.

(See: The housing recovery falters in 2014 because… the dog ate it)

First off, the housing starts data are seasonally adjusted. Second, while February was cold, there wasn’t as much precipitation as in January, as pointed out Tuesday morning by Trulia’s Chief Economist Jed Kolko.

The fact of the matter is, the home-building industry remains in a deep slump. One obvious reason for this is that ever since the Great Recession, Americans have been very reluctant to move into homes of their own. They’d rather double up with roommates, parents, or other relatives, and that is apparent in the fact that over the past two years, Americans have, on average, formed just 467,000 new households per year.

Over the past couple months, however, that trend looks to be reversing. The most recent data show that household formation in 2014 increased to 2 million, well above the long-term average of about 1.3 million new households per year: 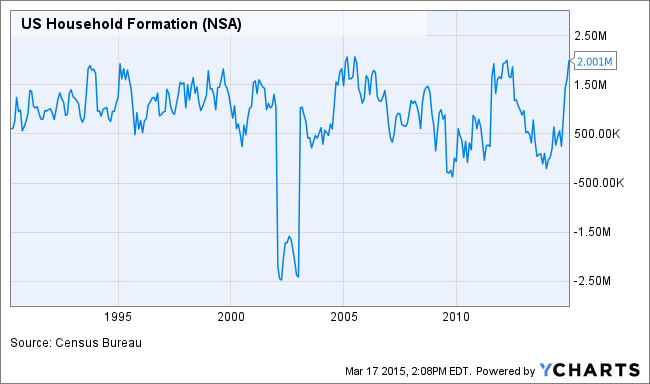 If this trend can hold, it could signal the next wave of the housing recovery that includes more higher-paying jobs for middle-class Americans in the construction industry. But we’ve had reason for false hope before, such as in 2012 when for a few months it appeared that we would see breakout growth in household formation, only for Americans to revert to their post-recession habits.

The question then for homebuilders and economists trying to predict future behavior is this: have Americans fundamentally changed their attitudes toward household formation? Are we now a nation of roommates and renters, cowed by the bursting of the housing bubble?

This cultural change wouldn’t be without precedent. The 1929 stock market crash and the ensuing Great Depression fundamentally altered the risk appetite of a whole generation of Americans. It wasn’t until the 1950s and 1960s that the taboo against risky investing began to fade.

In the 60 years between World War II and the housing bust, each generation obtained an education, secured a job, got married, and bought a home in the suburbs, enshrining our nostalgic notions of the American Dream. Unfortunately, lenders destroyed all that.

Irresponsible lending inflated a massive housing bubble, saddled a generation with onerous student loan debts, and poisoned the economy so many can’t find a job, which caused many Millennials to postpone marriage, family, and buying a house.

Perhaps the past few months of data are just a blip that will be corrected once home builders begin to sense that pent-up demand is about to let loose. But in the meantime, we’re still waiting for the real housing recovery to begin.

The last line of defense for the housing bulls is the fallacy of pent-up demand. Belief in this fallacy relies on people’s inability to distinguish between desire and demand.

Most people want a house. About 65% of Orange County residents own their homes, but probably 95% of residents wish they did. The desire for housing always exceeds the supply because there is always some segment of the market who is unable to obtain home ownership due to the cost of housing and a lack of available credit.

True demand is the amount of money those with the desire for housing can raise to put toward the purchase of real estate. If those with the desire for real estate do not have savings and if they cannot qualify for a loan, they create no measurable demand. When realtors make the assertion that there is pent up demand, they are correctly surmising that there is an increasing number of people who want real estate who cannot obtain it, they are totally incorrect in their idea that this demand is merely sitting on the fence waiting to enter the market at a time of their choosing.

When will homebuilding recover?

The short answer is when the growth of high paying jobs and rising wages creates demand for more houses. People who get high paying jobs either form new households or make move-up trades, but the jobs created need to be of high quality. Creating low-paying or part-time jobs may pad the government stats, but they do little to stimulate the housing market. Although the job market has been steadily improving since early 2010, the rate of job growth has been relatively weak when compared to previous recessions, and the quality of these jobs has been suspect at best.

I’m still hopeful 2015 will see economic growth that strengthens job and wage growth. Realistically, it will still be a long, hard slog, and we won’t see a full recovery in homebuilding for another two or three years, barring another recession.

31 responses to “When will homebuilding really recover?”