What will a long-term rise in interest rates do to home prices?

Everyone has an opinion on how rising mortgage rates will impact housing. Most of what you read in the mainstream media is wishful thinking from those who want to inspire buyer confidence in an uncertain market. The words of Pollyannas doesn’t educate anyone, but it does give people who are looking for assurance more than insight exactly what they are after. Most analysts agree that rising interest rates will reduce the buying frenzy. That much is clear (See: realtors lament low demand, low supply, and collapsing first-time homebuyer market). However, analysts are divided on the long-term impact of rising rates.

It’s a hotly debated question among economists and analysts right now: What will the recent spike in mortgage rates do to the housing market? …

Over the long run, “there’s no major correlation between rates and prices,” says Douglas Duncan, chief economist at Fannie Mae. Moreover, even at 4.75%, interest rates are still very low by historical standards. But the speed at which rates climb matters in the short-run, Mr. Duncan says, because it can force would-be buyers to adjust what they’re willing to pay.

This is the king of thoughtless and glib analysis that pollutes the MSM. I explored this in great detail in Future housing markets will be very interest rate sensitive. While it’s true that the correlation has been weak in the past, a good economist would explore why this was true. Previously, when interest rates went up or down, lenders could rely on affordability products and flexible debt-to-income ratios to keep prices moving upward. Since affordability products are now banned, and since the maximum DTI is capped at 43%, these tools are no longer available. This will make rates and prices correlate much more strongly in the future.

Other data, however, show that the amount of debt sought by prospective borrowers has fallen from a peak in early May, before mortgage rates began to rise, as the accompanying charts illustrate. While borrowing amounts are still above their year-earlier levels, the rate of growth has slowed. 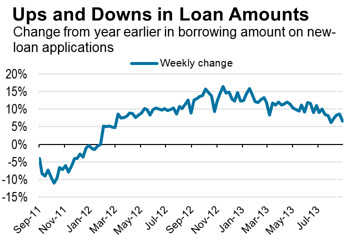 The main determinant of house prices is aggregate mortgage debt. It increased dramatically during the housing bubble, and it collapsed during the credit crunch. If mortgage balances are currently falling, either house prices will fall, or sales volumes will dry up.

I’ve written extensively about the impact of interest rates on house prices. I recently recounted the housing market impact of 25 years of falling mortgage interest rates. Today, I want to look more closely at what would happen if interest rates spent the next seven years rising back to the 7% level, the current average of the last 42 years.

The chart below shows the median home price, rental parity (current cashflow value), and fundamental value at a steady 7% interest rate. As you can see, rental parity has been above and below fundamental value at different points in the interest rate cycle. Each housing bubble where values detached from these fundamentals was caused by different mechanisms, but as mentioned previously, these mechanisms were all recently banned by the new rules on qualified residential mortgages.

Reversion to a mean is a concept from statistics that says values return to historic norms over time. Record low mortgage rates will not last forever. Each time values get detached from the mean, they revert back over time, and when they do, house prices generally fall in line at the new equilibrium level.

The Great Housing Bubble was kicked off by the dramatic drop in interest rates in the early 00s, but once it got started, it had a life of its own.

In the collapse of any asset bubble, values tend to overshoot to the downside as everyone who overpaid is flushed out in wave after wave of capitulatory selling. We didn’t get that this time due to a myriad of policies and market manipulations from lenders, regulators, and politicians.

If the federal reserve had not lowered interest rates, and if government regulators hadn’t suspended mark-to-market accounting, and if lenders had not embarked on a can-kicking loan modification policy to dry up MLS inventory, the housing market would have crashed far lower than it did. If the overshoot to the downside from rental parity were extrapolated to fundamental value, house prices in Orange County would have dipped well below $300,000.

Forestalling the disaster by artificially lowering interest rates means a longer and more painful period of reversion to the mean ahead. The chart below is my best guess as to how this might all play out.

Interest rates must rise from about 4.5% to 7% to reach historic norms. If this happens over a 7 year period — which is a very gentle rise — rental parity will still fall from its current level even as rents and fundamental values rise. Since rental parity will serve as a more rigid ceiling on appreciation in the future, when prices rise beyond this barrier, it will serve as a major drag on appreciation.

I do believe prices will rise above the affordability ceiling over the next few years. First, the percentage of all-cash buyers is near record highs. All-cash buyers are not constrained by financing, so the affordability ceiling does not apply to them. Second, until prices get close enough to the peak for borrowers to get out from under their bad loans, lenders will continue to restrict inventory keeping prices artificially high.

After a few years, lenders will liquidate enough of their bad loans that they will effectively lose control of the supply. Once organic sellers take over, sales volumes should increase, and sales prices will have to adjust to levels financed buyers can afford.

Plus, all-cash investors will start looking for the exits in a few years, and when they do, they too will need to find a financed buyer. Many all-cash investors may choose to keep holding their properties to get a better price, but with the ongoing pressure of rising rates, some will lose patience and get out while they are still ahead.

The bottom line is that the falling affordability ceiling will be a drag on future appreciation. Unless the magic appreciation fairy finds a new mechanism to push prices higher, this cycle of bubble reflation will be shorter than previous real estate rallies.

Once interest rates revert to the mean, and once the market adjusts to this new equilibrium, we will finally reach a state of market normalcy similar to the 1993 to 1999 period. By 2020, we may finally be past the excesses of the housing bubble.

An ordinary family in an ordinary house managing their finances like ordinary Ponzis. The former owners of today’s featured property borrowed $176,130 to buy this property in 1994. When prices started going up, they went Ponzi, and in a series of refinances they extracted $259,870 until they nearly tripled their original mortgage. Unfortunately, while they were tripling their mortgage, they weren’t tripling their income. Once they went Ponzi, there was no turning back.

51 responses to “What will a long-term rise in interest rates do to home prices?”