The only way lenders can avoid recognizing losses is to avoid foreclosure and deny short sales until prices rise back to bubble-era heights were sellers can get out without taking a loss. To this end, lenders engineered a dramatic shortage of for-sale product on the MLS by stopping foreclosure proceedings and encouraging underwater loanowners not to sell, often by denying their requests by insisting on full repayment. Although lenders must accept a lower return on their investment capital while they wait for higher prices, they ensure the return of their capital at some future date; further, the restricted inventory helps hasten the reflation of the housing bubble and pushes up the date when they might get their money back.

When the lender denies the request to re-modify the loan, the borrower has two choices: either pay the higher payment, or sell the house to pay off the loan. If the borrower chooses to sell, and many will be compelled to do so if they can’t afford the higher payment, that is a sale caused by financial distress. Further, some borrowers may simply succumb to the financial pressure and stop making payments entirely. In that case, the bank will foreclose, thus the deferred foreclosure. Whether the owner choses to sell when the payment goes higher or if they wait until a foreclosure, both circumstances are sales prompted by financial distress that would not have taken place otherwise; therefore, I believe loan modifications merely defer distressed sales. The financial media is finally figuring this out.

Since the housing market unraveled in 2008, lenders have slashed the interest rates on millions of mortgages belonging to struggling borrowers – but only for a limited time.

And for about 2 million of the loans, that time is up, or soon will be.

Starting this year, the rates will begin to gradually rise on those mortgages, and it’s unclear if the homeowners will be able to handle the higher payments, according to an analysis released Monday by Black Knight Financial Services, a mortgage research firm.

If you want to understand the details of how these loan payments increase over time, please review the post Lenders benefit from loan modifications, homeowners not so much.

Roughly 40 percent of the loans belong to borrowers who are “underwater,” meaning they owe more on their mortgages than their homes are worth, the analysis said. Those borrowers therefore can’t sell their properties or refinance if they run into financial trouble once the higher rates kick in, which increases their chances of defaulting on their loans.

“Given that the data has shown quite clearly [that] equity – or the lack thereof – is one of the primary drivers of mortgage defaults, these resets may indeed pose an increased risk in the years ahead,” Kostya Gradushy, Black Knight’s manager of loan data and customer analytics, said in a statement. …

Regulators and consumer advocates have flagged similar concerns about the most prominent of the government’s efforts: the Home Affordable Loan Modification Program, or HAMP.

It isn’t only rising interest rates on loan modification resets that are the problem. Mortgage payments can also change when a mortgage is recast, which is a change from an interest-only amortization to a full amortization. A recast is a far more serious problem than a reset. A reset can be mitigated my merely holding the interest rate the same, whereas a recast is a much more dramatic payment shock because principal repayment is suddenly added to the interest cost.

Wells Fargo & Co. is overhauling its offerings of home-equity lines of credit so that most new customers will be required to pay principal and interest over the life of the loan, a significant shift by the nation’s largest home-equity lender.

That is a recast.

Many consumers borrowed heavily during the housing bubble with little consideration for what would happen in 10 years, since few expected home values to decline sharply and leave them without the ability to refinance their loans and avoid higher payments.

That’s being generous with their reasoning. Most borrowers took the free money because they never believed they would have to pay it back. The house itself was always supposed to repay this loan. Also, they expected continually lower interest rates in order to service this increasing debt without making larger payments.

In short, most HELOC borrowers were either careless or stupid. 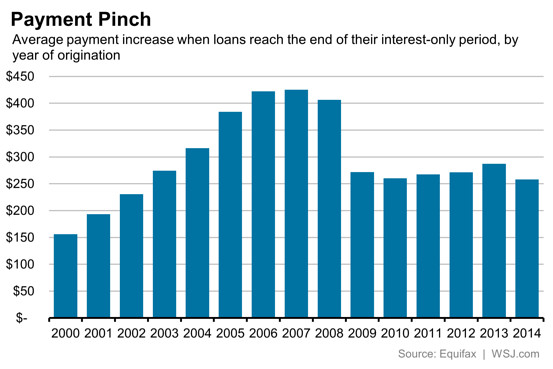 Loan performance data from Equifax, the credit-reporting firm, shows that delinquencies rise for borrowers who face increases in monthly payments.

This is why can-kicking is inevitable. 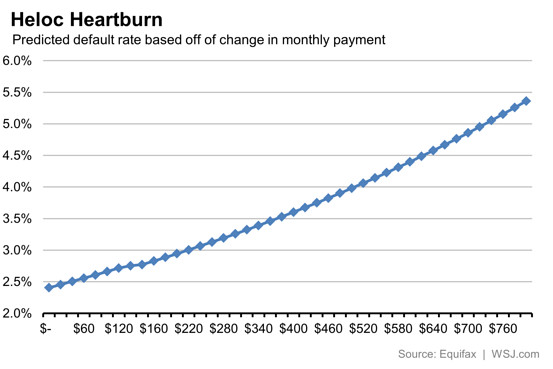 By restructuring the product, Wells eliminates the prospect of future payment-shock issues. “The product should be designed to protect the consumer for the long term,” said Brad Blackwell, a mortgage executive at Wells Fargo.

The product should have been designed to protect the consumer from the start. Interest-only loans are designed to maximize lender revenues at the expense of borrowers, so it makes me giddy to see lenders lose their asses on these loans.

“We took this move not only because it’s the right thing to do for our customers, but because we’d like to lead the industry to a more responsible product.”

LOL! Bullshit! They made this change because they stand to lose billions on HELOCs, particularly if the bubble doesn’t fully reflate and provide collateral value behind these loans.

Wells says that it will continue to offer interest-only Helocs only for customers with significant assets. While the vast majority of homeowners today take out first-lien mortgages that are fully amortizing, most Helocs allow borrowers to make only interest payments typically for 10 years.

“By doing so, they’re not creating any additional equity in their properties,” said Mr. Blackwell.

HELOCs consume equity, so of course it doesn’t create any additional equity. This guy is actually suggesting that because these new HELOCs amortize, they are creating equity. Unbelievable!

Requiring loans to amortize from the start gives consumers a payment that’s more realistic and helps create equity in the home. “We wanted to fix a flaw in the product that caused payments to go up sharply,” he said.

The changes don’t have much practical impact for current borrowers. Wells forecasts that around $28 billion of some $74 billion in Helocs will recast through 2017.

If they don’t fully reflate the housing bubble by 2017, they will have to modify these HELOCs as these loans won’t have collateral backing if they need to foreclose.

This story was good public relations, but lenders only pretend to care much whether or not loanowners stay in their homes; lenders really only care that the borrower pay something on the loan long enough for prices to rise high enough for lenders to avoid a loss. Lenders are eager to buy time and get some income from these loans while they wait. Loan modifications are can-kicking, nothing more.