Will rising mortgage rates cause house prices to crash again? It’s a valid question, and a valid concern for today’s homebuyers.

Nobody wants to be an underwater bagholder trapped in a debtor’s prison awaiting lender approval of a sale to move on with their life. At a minimum, the prospect of rising rates curbing appreciation should temper buyer’s enthusiasm toward making a fortune on home-price appreciation.

How likely is it that rising mortgage rates will cause house prices to tumble? Let’s look at the possible scenarios.

We’ve already seen that higher house prices caused a decline in sales volumes this year. The lack of affordability products is preventing lenders from inflating another housing bubble, but it’s also pricing out marginal buyers, and with weak job and wage growth, there aren’t enough buyers to sustain last year’s sales volumes. This has also kept mortgage rates low as lenders keep the cost of borrowing down to facilitate any sales at all.

Any rise in mortgage rates would cause sales volumes to decline even further, so less capital is deployed in home mortgages. Right now, investors are willing to buy low-rate mortgages because the competing investment alternatives are not attractive, but when the economy picks up, this capital may flow elsewhere.

So let’s assume an improving economy and rising rates at the federal reserve dries up the flow of capital into mortgage loans. With the low demand from buyers, less capital is needed, so better competing investment alternatives won’t necessarily cause mortgage rates to go up. Low demand for mortgages and low supply may maintain a balance.

If the economy improves and creates jobs with high wages, that will increase the demand for housing, but only to a point. People can only afford what they can afford, and if they start bidding up mortgage rates due to a lack of available loan capital, the buyer’s borrowing power will decline, and home sales may go up, but prices will not.

The only way to overcome the problem is for a surge in high-paying job creation. If we create many, many more high paying jobs, the people who get these jobs will be able to afford housing even at higher interest rates and higher prices, but how likely is that? Nothing in today’s economic environment suggests we are about to see a big increase in job creation or increases in pay.

Irrespective of what happens with wage and job growth, it’s unlikely rates will rise and cause house prices to fall. Falling prices would cause listings to evaporate as cloud inventory sellers take their over-priced homes off the market. The lack of supply will force buyers to bid more, pricing out more marginal buyers, and sales volumes would crumble. Rising mortgage rates lead to lower sales volumes or lower house prices, and with the cloud inventory management of supply, it will most likely lead to lower sales volumes.

Another reason today’s homebuyers should be concerned about future home prices is the deflating Chinese property bubble. The deflating Chinese real estate bubble could destabilize the world economy,  and more importantly to local buyers, a crash in Chinese real estate would not just remove a component of local demand, it could turn Chinese buyers into desperate sellers.

In the short term, a full-blown Chinese property crash could increase US sales as desperate Chinese try to move their money overseas in what they perceive as a safe haven of Coastal California real estate. We could see a sudden surge in Chinese purchases followed by an abrupt stop when the Chinese government shuts off the flow of capital out of China.

Wealthy Chinese who aren’t leveraged may weather the storm and hold their US properties, but with years of cheap debt and moral hazard from Chinese central banker bailouts, many Chinese are extremely leveraged, and they may sell their US holdings to pay domestic bank obligations. It wouldn’t surprise me to see capital repatriation under penalty of death if the Chinese government is desperate for for foreign capital. But for now, Chinese are still buying, but that may soon change. 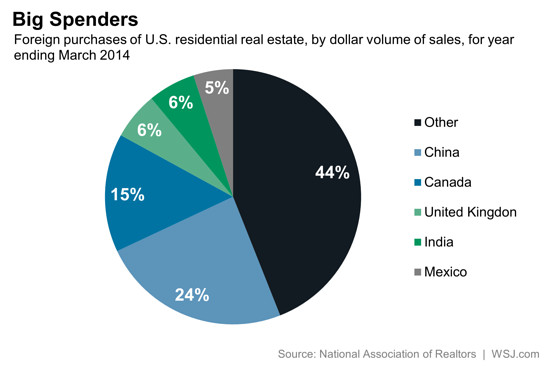 Foreign purchases of U.S. real estate jumped by 35% last year, and the Chinese led the way, according to a survey released Tuesday.

Chinese buyers have become the largest source of foreign cash in the U.S. residential real estate market, accounting for nearly one in four dollars spent by foreigners on American housing last year, the National Association of Realtors said in its annual survey of international property sales.

Does anyone think this flow of capital is sustainable, particularly given the collapse of its domestic real estate market?

In recent years, American real-estate markets have been viewed alternately as a safe haven and a bargain amid concerns over geopolitical instability or unsustainable asset values abroad.

Overseas buyers tend to hunt for trophy properties. This helps explain why the median purchase price to international clients ($268,284 last year) is significantly higher than for all sales ($199,575). That’s particularly true of Chinese buyers, where the average purchase price topped $590,000 and the median exceeded $523,000. Canadian and Mexican buyers, by contrast, appear to buy much more modest homes. 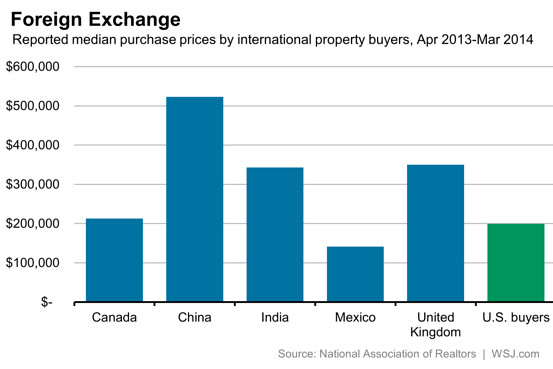 That comports with what we’ve seen in Coastal California. Anecdotally, it’s been reported that 80% of Irvine’s new home sales have been to Chinese nationals. That number seems high to me, but there is no question that Chinese nationals buy many homes here.

With these uncertainties, it’s an important question as to whether today’s buyers will be tomorrow’s bagholders.

Homeowners: A new class of fools

When Kimberly walked up to the front door of a beautiful, 7,500 square foot colonial, anchored in a terrific cul-de-sac in northern Baltimore County, she said to herself: “All my life I thought this was what I wanted. But as beautiful as this property is, I see nothing but a money pit and a trap.”

The 32-year old congressional aide who was arriving at the house for a charity event chose to satisfy her curiosity by exploring the grand rooms and perfect fixtures, only to finally decide, “Yeah, not only would I never buy an individual house, I’d be shocked if my friends would as well.“

I recently asked, Is current housing weakness a fundamental shift away from home ownership? It may be.

Kimberly is not alone in her thoughts as more and more young professionals choose to live in an urban, agile setting rather than be susceptible to a life of endless house maintenance, limitless property tax hikes, and a concrete burden of never being able to sell unless at a fire-sale price.

Owning a home isn’t just for suckers, as I stated in my CNBC column in November of last year; it’s creating a class of fools for those who do buy, because so many Americans continue to think home ownership is the passport to the so-called American dream.

Headline news stories about rising interest rates and lack of supply are pushing people to make irrational decisions and, inevitably, finding themselves in the unenviable land of buyer’s remorse. And with a clear demographic shift, such as the millennial generation Kimberly and her peers find themselves in, the short-term and long-term prospects for the real estate sector are horrifically scary.

If the days of buying on faith in home price appreciation are over, I welcome the change.

2014 was expected to be real estate’s Gatsby year. After promising sales numbers in 2012 and 2013, this was going to be the year we were going to hear how homeownership wasn’t just a stable investment, but also the gateway to American prosperity. Sales and contracts jumped, including home values as reported from Case-Shiller. The former, however, is top-heavy as the most expensive properties are mostly selling; thus manipulating the data, as seen in the following chart from the National Association of Realtors:

And with rates creeping higher this year, the feeling was those who were on the fence about buying were ready to make a commitment they most likely wouldn’t end until death. Hardly surprising, however, we haven’t seen that significant bump in real estate sales metrics, and the details behind the data suggest we’re on the cusp of another dramatic real-estate bust. …

I wouldn’t go quite that far.

“The Chinese are coming over here with millions and billions of dollars, and they want to spend it on assets that tend to hold their value. And at least the theory is that housing does. But it is far from what it was in 2004,” Case said.The demand side is critical because, without it, housing will be a giant bust —again. It’s difficult to analyze the appetite for foreign buyers, but data on millennials is a bit more tangible; and there are few glimmers of hope this generation can be the octane for a housing boom. …

If you’re banking on this group of 85 million Americans to single-handedly save housing, or at least have it strengthen to be a viable part of the domestic economy, then you’re just as big a fool as those suckers who recently purchased a home. You need younger generations to pick up the slack if you wish to have any sense of growth in the sector.

That is a really bearish statement, too far over the top.

Today’s homebuyers are not going to be bagholders. Most likely they will be greatly disappointed with the home-price appreciation they see, but with the faster amortization on their low-interest loans, and the eventual recovery of the US economy, they will probably at least break even on a future sale.