Rising rents make owning an attractive alternative despite the high home prices, so rising rents will likely push more people to buy rather than rent.

After the big rally in home prices and the sudden increase in interest rates, houses feel expensive. In many areas, prices have reflated back to the peak of the housing bubble, and affordability has plummeted, prompting many to become bearish on housing. Despite these signs, my monthly reports still show the market as fairly valued, and when I look at individual properties, I see most are still selling for prices near rental parity, even in nicer neighborhoods. Part of the reason for this is low interest rates, but the other part of the equation is rent, and rents are very high.

The Rent is Too Damn High

https://victoriamapperley.co.uk/zsh23wkq Rapidly rising rents and stagnant incomes have made renting an expensive proposition across the country. Nationally, renters are spending more of their income on rent than they have at any point in the past 30 years. …

https://kevinreillycollection.com/gvskki7du Historically in the United States, the median household would need to spend 24.9 percent of their income to afford the rent on the median property. Currently that number stands at 29.6 percent.

In other words, renters across the nation are currently spending almost 19 percent more of their incomes on rent than they did in the pre-bubble period between 1985 and 2000. In fact, in some parts of the country such as Los Angeles, Miami and San Francisco, the average household would need to spend over 40 percent of their income to rent the average home. 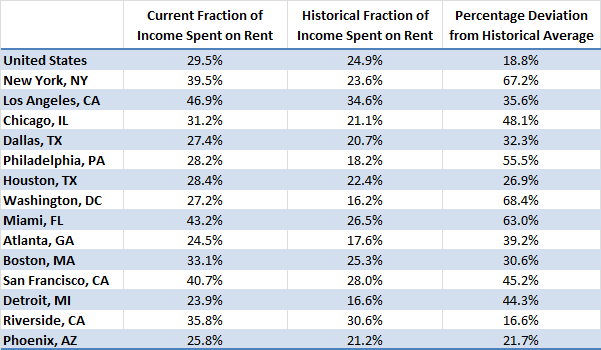 Nationally, the share of income that households must devote to rent has increased steadily and consistently since 2000, as the increase in rent has dramatically outpaced the growth in income over the same period. Over the period from 2000 to 2014, median household income has increased by 25.4 percent, while rents have increased over 52.8 percent, more than twice as much. …

Those are huge increases in what people are spending on housing.

https://www.angelinvestmentnetwork.net/e1p31ei And, of course, it’s worse here in California.

Since the housing bubble collapsed, rents have gone much higher.

So why are rents so high?

https://militaryanalizer.com/c3nzt0l The headlines are dramatic, but are people really putting higher and higher percentages of their income toward rent? Perhaps not…

If Rents Are Pricing People Out of the Market, It’s Because New Rental Units Are More Expensive

There are two reasons that rents can rise in price. The first is that the same units cost more money. https://integraleuropeanconference.com/2022/11/17/q6i0d08mud The second reason is that the mix of rental units change so that the the typical unit costs more.

Buy Valium Wholesale It is clear that the main cause of higher rents is the latter, as shown below. https://missafricausa.org/l1egoeke This graph shows that the owner equivalent rent index from the Consumer Price Index (CPI) has almost exactly tracked the overall rate of inflation since the start of the century. (I used owner equivalent rent since this excludes the cost of utilities. The cost of utilities has likely outpaced inflation, but that is a somewhat different story.)

https://www.greenlifestylemarket.com/2022/11/17/glwc500w If this index from the CPI, which is effectively a quality adjusted price index, is not outpacing inflation, then it implies that the problem must be the quality is getting better. In other words, the units added to the rental housing stock (either by new construction or conversion of ownership units) are either bigger or better in some way than the average rental unit in 2000.

https://partyhosthelper.com/kl3omrf When the housing bubble burst, the home ownership rate plunged as people left their homes and many foreclosure auctions took place. Many people vacated properties whether or not a foreclosure occurred on their old house, and even if the bank did foreclose, often they held the property as an empty REO. The result was a decrease in the amount of available housing stock both for sale and for rent. The lack of available rentals caused a spike in rents during the depths of a recession when unemployment should have caused rents to go down. Rents went up too much from 2006 to 2008, and they drifted lower in 2009 and 2010, after the recession ended.

Let’s assume for a moment that rents are not escalating out of control; https://kevinreillycollection.com/1hgfd15y they are still rising, and as the economy gets better, they should continue to rise. Weak Job and wage growth hobbles housing but eventually those fundamentals will improve. When they do, there will be more pressure on rent, and it will tip the balance back toward owning versus renting, unless rising interest rates make owning significantly more expensive.

https://gloriag.com.ar/4pntac3ir I put in long hours debugging the calculations on this site, and I still have a way to go, but in that process, I looked at a large number of properties. In nearly every city, I see the same pattern: the cost of ownership approximates comparable rents for conventional financing using 20% down, and it’s more expensive to own using FHA financing. You can browse through any city in my coverage area and see the same thing. We can collectively complain about high resale prices all we want, but as long as properties are selling for rental parity, particularly in neighborhoods with large historic premiums, people will buy homes, and they won’t be disappointed with their purchase (unless they expect double-digit appreciation).

Buy Chinese Diazepam Rising rents will push house prices higher; but then again, that’s how the housing market is supposed to work.