Was removing distressed house supply essential to the economic recovery?

If I understand Keynesian theory properly — which is important to understand federal reserve policy — inflating asset values through low interest rates is supposed to trigger businesses to expand because borrowing costs are so low, they can make marginal opportunities work. Business expansion puts people back to work, puts wage income back into the economy, and stimulates demand for more goods and services, which in turn creates more business demand, puts more people back to work, and so on — a virtuous circle.

But how is that supposed to work when we already have overcapacity? If we aren’t making use of the property, plant, and equipment we have now, why would business expand? If capacity utilization is only running at 75% to 90%, if businesses saw an opportunity, they would put existing capacity to work before expanding, but utilizing existing capacity does little to stimulate the economy.

So what’s the answer? Create an artificial shortage of capacity or supply and wait for businesses to respond to the false signal. In other words, distort the economy further.

Take homebuilding for example. Despite builder beliefs to the contrary, we don’t need any more homes. We had an entire industry come into existence (REO-to-rental) to mop up the oversupply. We have a huge inventory of distressed properties temporarily removed from the market with loan modifications and delinquent mortgage squatting. But rather than recycle this inventory, by removing it, we create an artificial shortage requiring builders to respond with new inventory. This is putting people back to work in homebuilding and beginning the virtuous circle the Keynesians dream about — and it’s actually working.

Is this what success of the Keynesian model looks like?

New York (MarketWatch) — After a nice six-month run, the housing recovery story has soured, at least according to the stock market. Shares of homebuilding companies are in decline and look to have plenty more room to fall.

That deals a big blow to those looking for stronger housing propping up the fragile economic recovery. And even though there was good news on the earnings front from the likes of KB Home (NYSE:KBH)  and Lennar (NYSE:LEN)  in the middle of last month, the overall industry news is questionable. For example, existing-home sales in February were the slowest since July 2012. Builder confidence plunged that month, too. You can contact adtmoving to help you and your family move your things to the new house. 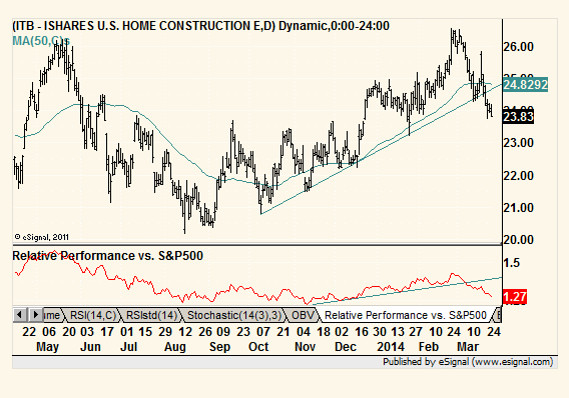 The charts tell the story. Last month, the iShares U.S. Home Construction ETF (NAR:ITB)  rallied up to levels not seen since May 2013 and closed above that resistance level (see Chart 1). But within days, the sellers took over, prices fell and the technical breakout failed. Chart watchers will note that failed bullish signals often become bearish signals, and for homebuilders, it was certainly true. Prices have been in decline even since.

The breakdown of that upward trendline may cause some chartists to freak out, but stocks move up and down all the time. Based on the chart above, one could also argue that homebuilder stocks are consolidating briefly just below the recent one-year high, and it’s poised to break through on a new bull run.

Investors should be careful in the homebuilding sector. The charts paint a weak picture and smart money seems to be fleeing.

Housing in recovery, but not its stocks

… “It seems like everything is set up very nicely for the housing market to have a solid year, not a boom that we can’t replicate, like we saw in the first half of 2013, but I think it’s just about right-sizing people’s expectations,” said analyst Ivy Zelman, CEO of Zelman Associates.

Last year, Zelman famously declared the market was in “housing nirvana.” Then last month, she admitted nirvana had taken a pause but was “around the corner” yet again. She said fundamentals are still good, and she is surprised at the bearishness among traders.

“We think housing starts will be definitely up at least double digits. We know the builders are bringing a significant amount of new product to market,” Zelman said. But, she added, “I guess the expectations have just gotten so negative, and I think that it’s piling on bearish sentiment with [Federal Reserve Chairman Janet] Yellen also indicating that the Fed could tighten sooner.” …

The bigger lesson here is that homebuilding stocks are going to be volatile over the next several years because homebuilders are responding to false market signals. In the mid 00s, during the housing bubble, homebuilders were responding to false market signals and built many homes we didn’t need. When the housing bubble burst, the industry paid for it with crashing stock prices, and construction workers paid for it by getting laid off for five years.

Is homebuilder hiring reluctance holding back the economy?

The homebuilders are hiring again, but after laying off 90% of their workforce in 2008, they are in no hurry to staff up. I recently spoke to a hiring manager from a major homebuilder, and he explained it just that way. He told me his company had 25 project managers working for them on sites across Southern California. In 2008, he fired all but two of them — two workers had to do the job of 25. It’s painful to fire so many good, experienced, and qualified people, many of whom were likely friends. Nobody wants to go through that again, so when homebuilding started to pick up, homebuilders didn’t hire, they just made existing staff work harder. The staff is so overworked that the builders must hire people now, but they are hiring as few as possible, and those that do get hired are expected to work 50-60 hours a week or more.

When the Keynesians construct their theoretical and mathematical models of the economy, they don’t anticipate and can’t model the emotional reactions of hiring managers like the one I talked to; however, these reactions are real and understandable. According to Keynsian thinking, homebuilders should have begun staffing up two or three years ago, which would have stimulated the economy. Instead, these hiring managers reacted fearfully and didn’t hire more people — they utilized their overcapacity; they got more productivity out of the staff they had.

Based on the macro picture for homebuilding, these hiring managers are right to be cautious. Although almost none of them know or care about the myriad of market manipulations creating demand for their product, they were once bitten, so they are shy about hiring today. Since the demand for their product is the result of artificial stimulus and supply manipulation, they may face future layoffs as these distortions come back to reality.

17 responses to “Was removing distressed house supply essential to the economic recovery?”