In February I made the case that future housing markets will be very interest rate sensitive. When you look at the mechanisms used to inflate previous bubbles — using teaser rates, allowing excessive DTIs, and abandoning amortization — these were banned by the new residential mortgage rules. Lenders aren’t be able to use these tools to soften the impact of interest rate fluctuations or provide “affordability” when the market reaches its friction point. This is the main reason the market changed so dramatically and so suddenly when mortgage rates surged in June. Today, I want to follow up and show the mounting evidence of the housing markets extreme sensitivity to interest rate fluctuations.

We’ve all been following the headlines over the last few months of the end of bidding wars and the slowdown in appreciation. Anecdotally, many have observed a number of deals falling out of escrow when interest rates surged, and these properties are making their way back on the market with significant price reductions. Even realtors lament low demand, low supply, and collapsing first-time homebuyer market. Redfin is reporting a large decline in bidding wars, and I recently helped out with a sale where the buyer faced no competition. There is more evidence to consider.

The overall index value for October was 55, two points down from September’s revised 57. September’s index was originally reported at 58, flat with August.

“A spike in mortgage interest rates along with the paralysis in Washington that led to the government shutdown and uncertainty regarding the nation’s debt limit have caused builders and consumers to take pause,” said NAHB chief economist David Crowe….

So why is building confidence down?

(Reuters) – Sales of new single-family homes in America rose in August but held near their lowest levels this year, a sign that a sharp rise in interest rates is weighing on the U.S. economy. …

Sales rose 7.9 percent to an annual rate of 421,000 units, the Commerce Department said on Wednesday.

The pace of sales was in line with analysts’ expectations and supported the view that rising mortgage rates were taking steam out of America’s housing recovery.

The view among everyone quoted in the mainstream media over the last several months was that rising mortgage rates would not take the steam out of the housing recovery. All those quoted experts were wrong.

August’s increase in new home sales did not make up for the steep drop registered in July, when the pace of sales was the weakest since October.

Mortgage rates surged beginning in May when the Federal Reserve gave signals it was thinking of winding down a bond-buying stimulus program. The Fed surprised financial markets last week when it said it would put off reducing monthly bond purchases for now. Policymakers said rising borrowing costs played a role in their decision.

What’s been surprising to me is that activity hasn’t picked up since the no-taper announcement caused mortgage rates to drop again. Apparently, it’s both rising mortgage rates and asking price sticker shock.

The housing market, which has been a major drag on America’s economy since the 2007-09 recession, appeared to turn a corner early last year when home prices began to rise.

Last month, the median price for a new home sale fell to $254,600. The median sales price, which is not adjusted for seasonal swings, has fallen every month since May, although is still up slightly from August 2012.

Now home prices have fallen every month since interest rates went up. That is very strong evidence of the sensitivity of the market to rising rates.

The inventory of new homes for sale increased by 3.6 percent in August from July, leaving the stock of unsold new homes at its highest level since March 2011.

To make matters worse, builders are holding more inventory. I expect to see more incentives to move homes over the winter months.

It isn’t just new home sales that are hurting.

realtors noted the mini-boom in housing is already over:

“We are getting early signals from lock boxes that show a significant change in direction in August,” said Lawrence Yun, chief economist for the National Association of Realtors, referring to the small key boxes that hang on the doors of for-sale homes. The number of times they were opened in August dropped dramatically, signaling a big drop in potential buyer traffic.

Yun claimed the jump in August sales was based on fear of rising rates. August numbers are based on closings for contracts that were likely signed in June. June saw the biggest spike in mortgage interest rates.

“That hurried people into making a decision,” said Yun. “It was the last hurrah for the next 12 to 18 months.”

If realtors are publicly admitting the market changed suddenly and dramatically due to rising interest rates, then it must be difficult to deny or spin any other way.

In Orange County, sales volumes in September plummeted below last years levels. Many bulls were confident in the so-called recovery because sales volumes were maintaining a small but steady increase over last year’s levels. That meme is no longer operative.

The slowdown in buying  among owner-occupants has been significant since mortgage rates began climbing.

A gauge of mortgage applications to buy a home fell 5% in the week that ended Oct. 11, posting a third week of declines, according to data from the Mortgage Bankers Association. Purchase applications for government programs fell more than 7%, hitting the lowest level since December 2007. Conventional purchase applications also fell, declining almost 4%. … 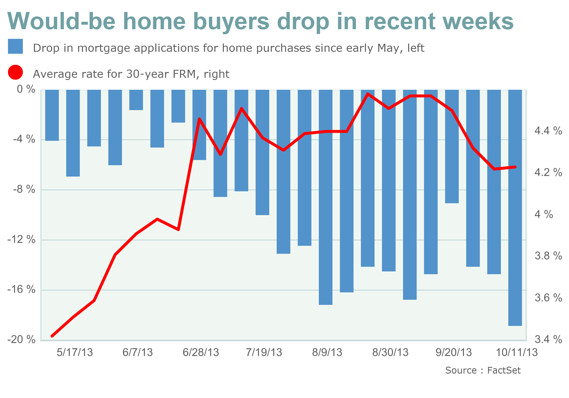 As I mentioned above, I am surprised that mortgage applications kept dropping even as interest rates went back down. Perhaps it’s part of the seasonal pattern, but it’s not a particularly good sign for market bulls.

With the normal mechanisms for smoothing out interest rate fluctuations banned, house prices and sales volumes will be dictated by the course of interest rates. It’s widely believed mortgage interest rates will rise in the future. I recently asked What will a long-term rise in interest rates do to home prices? Based on what we’ve seen over the last few months, we can expect sales volumes to plummet when interest rates rise, and if they rise high enough, price pressure will mount. We won’t see a crash without must-sell inventory, but we may see air pockets where prices drift lower as discretionary sellers decide they want to get out.