Do loan modifications cause rents to rise too?

Lenders embarked on a policy of aggressive loan modification to dry up the MLS inventory and force house prices to bottom in order to restore collateral value behind their bad bubble-era loans. Nobody disputes this, not even lenders.

Lenders didn’t have much choice but to pursue this policy because the alternative of curing their bad loans through foreclosure, besides being politically unpalatable, would have bankrupted the banks with trillions of dollars in losses. The problem with any policy that manipulates a financial market is the unforeseen or unintended consequences of their actions. One such consequence is and unsustainable increase in rent.

In the depths of the Great Recession, incomes dropped and many people lost their jobs and many others barely hung on. Ordinarily, such circumstances would cause rents to weaken as fewer workers with less money bid on the available rental housing stock, forcing landlords to compete with each other for tenants. Unfortunately, that isn’t what happened.

When the housing bust began, lenders foreclosed on the subprime borrowers whose loans blew up first. This displaced a great many people who were forced to search for rentals. In an efficient market, each new renter would have matched by a new rental unit as the foreclosed home was converted to a rental unit; however, many of these properties were not processed quickly, and vacant homes abounded, particularly in the fringe markets. A vacant home is not an available rental unit, so the number of renters exceeded the number of rentals, and rental rates actually went up quite dramatically during a time when rents should have gone down.

The REO-to-rental movement brought many more rentals to the housing market, but not enough to bring rents back down to reasonable levels. The result was rising rents on stagnant income, a problem that persists to this day.

… The average monthly rent for an apartment rose to $1,099 in the second quarter, up 0.8% from the first quarter, according to data to be released Wednesday by real-estate research firm Reis Inc. That was the 18th consecutive quarter of rent increases.

For the 12-month period ended in June, rents rose 3.4%.Effective rents—which tend to be lower than asking rents—were up in all 79 U.S. metro areas tracked in the Reis report. West Coast cities that have been the model of recovery continued to top the list of highest rent growth for the quarter and over the past 12 months.

Rent growth exceeded 6% over the past year in San Francisco, San Jose and Seattle.

My housing market reports also shows rising rents, but not as strongly as this report suggests; in fact, rent growth has been weakening over the past several months.

Even cities that aren’t normally associated with fast rent growth, such as Charleston, S.C., and Nashville, Tenn., posted strong growth over the year, up about 5% or more for the year.

“You have definitely seen that recovery now spread to all of the major markets around the country, even if some of them were laggards,” said Ryan Severino, an economist at Reis. “It’s a very pervasive recovery.”

Recovery? It’s a very pervasive inflation of rents without supporting jobs or income. 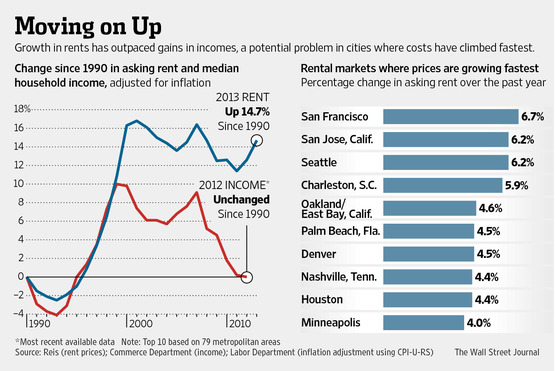 “If you can’t get into a single-family house and you can’t get a mortgage, well, you don’t need a mortgage to get an apartment,” said Stephanie Karol, an economist at IHS.

That’s exactly what drives much of the increase in rents.

But household incomes have stagnated, resulting in a financial squeeze for a growing number of renters. Median household income was $50,017 in 2012, below 2007’s peak level of $55,627, after adjusting for inflation, according to U.S. Census Bureau data. …

Rising rent without rising income is an imbalance in the market.

“We think new supply will self-correct rising rent,” Ms. Karol said. “It will be a continuous process of easing over the next few years.”

But Mark Zandi, chief economist at Moody’s, says affordability problems will likely remain, especially for lower-income households. “There’s going to be a very severe housing-shortage problem,” he said. “People are going to be in very difficult situations. This is a problem that’s going to be increasingly severe over the next few years.”

If Mark Zandi says it will be a huge problem, rest assured it will not. The problem will correct itself as new rental supply comes to the market.

Los Angeles Still on Wrong Side of Housing Recovery: Study

Los Angeles—The U.S. housing market is on its way to recovery, according to a Harvard study released Thursday, but many challenges lie in its path.

“The housing recovery is following the path of the broader economy,” said Chris Herbert, Research Director at Harvard University’s Joint Center for Housing Studies. “As long as the economy remains on the path of slow, but steady improvement, housing should follow suit.”

Given that incomes are stagnant and unemployment is still high, and many wage earners are dropping out of the job market, the glib and Pollyanna assessment of the Harvard researcher lacks fundamental support.

The report, cited issues such as tight credit, high unemployment, and record levels of student loan debt that are keeping young Americans and first-time buyers out of the housing market.

Out of 381 cities in the study, Los Angeles is the city that is struggling to afford housing the most.

According to the study, half of all households in Los Angeles are “cost-burdened”, meaning they spend at least 30 percent of their income on rent or mortgage payments.

Despite having less expensive housing than high-cost markets like San Francisco, Washington DC, and New York, Los Angeles resident’s wages have stagnated in recent years and the city is facing a shortage of affordable housing.

Los Angeles had affordable housing two years ago, but a sharp rally that inflated prices about 50% destroyed affordability for potential homeowners. Lenders that conspired to inflate house prices to save their own skins created an affordability problem where none existed.

“Without expanded federal funding to aid the neediest households millions of US families and individuals will continue to live in housing that they cannot afford or that is inadequate, or both,” the study concludes.

More subsidies are not the answer. A subsidy that benefits anyone is paid for by everyone. Either through direct tax payments or indirectly through inflated prices on the remaining housing inventory, everyone pays for the subsidies enjoyed by a few.

We know providing loan modification subsidies serves to increase home prices because it keeps these homes off the MLS and forces buyers to pay more for those properties not burdened by a loanowner surviving on a loan modification. That mechanism is well understood. What’s less obvious is the impact this has on rent as well.

If the loanowner were not granted a loan modification, the resulting foreclosure would recycle the property and put it in the hands of an owner who would extract the full financial value. If the property is picked up by an owner-occupant, they pay a monthly mortgage payment approximating rent, thus providing a return to the investor who provided the mortgage. If the property is picked up by an investor, they charge a tenant a monthly market rent which also extracts the maximum market value.

The loanowner living in a property they can’t afford with a loan modification subsidy is preventing either owner-occupants or investors from maximizing the economic value of the property, impacting both resale prices and rental rates.

There is no question loan modifications impact resale value of homes and inflate market prices. In my opinion, the same forces impact market rent, and it explains some of why rents went up and remain high even when incomes are stagnant.

44 responses to “Do loan modifications cause rents to rise too?”