Is current housing weakness a fundamental shift away from home ownership?

Housing sector weakness may be a sign of a change in attitudes away from home ownership as defining the American Dream.

When house prices crashed in 2008, we had an opportunity to usher in a new era of affordable housing with a lower percentage of income devoted to housing in the United States. With less income going toward housing, more income is freed up to spend on other goods and services, stimulating the economy in a sustainable way.

However, that isn’t what politicians decided to do. No, they decided to bail out the banks with a plethora of bailouts aimed at supporting the banks and the loanowners who owed them money. If we had purged the excessive debts created during the housing-credit bubble through foreclosure and recycling the homes, we would be enjoying low, affordable house prices and a strongly growing economy. Instead, we have a weak economy and a weak housing market.

Houses are as expensive as current income levels can push them at near record low interest rates. Housing is weak because job and wage growth is weak, and marginal buyers are getting priced out. It’s really not more complicated than that. And since buyers are now forced to pay the maximum amount their incomes can afford, less disposable income is available to spend on goods and services, weakening the economy.

In short, housing and the economy are weak because we continue to divert excessive amounts of money to the banks. Does the federal reserve recognize this? Of course not; to do so would be tantamount to treason to the member banks that own the federal reserve. We are still paying for the bailouts of lenders and loanowners with a weak economy and high-priced housing.

Fed minutes outline the different reasons housing has been sluggish 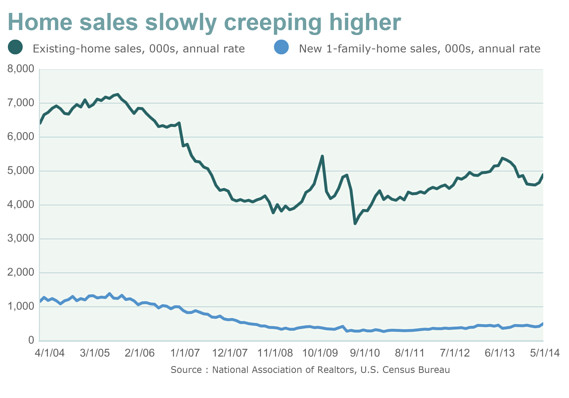 Higher house prices and higher interest rates priced out marginal buyers and hedge funds, so since June of 2013, home sales fell, and they will continue to be weak for the foreseeable future.

The housing market has been hit by factors ranging from tough credit standards to burdensome student loans to a lean supply of properties on the market, according to minutes released Wednesday from a recent Federal Reserve meeting.

Closings for new and existing homes had a rough first quarter, prompting Wall Street analysts to lower their annual sales forecast for 2014. Prominent economists had been expecting low mortgage rates to support home sales. But cheap loans haven’t been enough to overcome the below factors discussed by Fed officials in June, according to the minutes.

Prominent economists were looking at the market through rose colored glasses and succumb to their optimism bias and hoping for the best. It was obvious to anyone who looked with objectivity that house sales would be weaker as high prices drove hedge funds from the market. Prices were not pushed higher by surging demand from owner-occupants — the only way housing markets achieve the elusive “escape velocity” economists where hoping for, so when the investor demand left, owner-occupant demand did not take its place. Until the economy creates large numbers of high-paying jobs, which is the real problem they don’t mention, we won’t have strong housing demand.

Credit standards are not tough; they are prudent. Lenders are not giving Ponzis and deadbeats loans; we tried that once, and it didn’t work out very well.

High compared to what? The FHA will give nearly anyone a 3.5% down loan for amounts far in excess of the GSE conforming limit. Apparently, even 3.5% down is too much with how high house prices are.

This is a direct result of lender’s policies to restrict inventory through delaying foreclosures with loan modifications and denying short sales. They could fix this problem today by simply changing their policies.

Rising construction costs are not due to high demand for construction materials. New home construction is still in the doldrums. If prices are higher, it’s entirely due to federal reserve policies inflating all prices. Much of the speculative money floating around is going into commodities and driving up builder costs.

And then there’s this potential biggie: “The possibility that more persistent structural changes in housing demand associated with an aging population and evolving lifestyle preferences were boosting demand for multifamily units at the expense of single-family homes.”

The real question is whether or not home ownership is still the American Dream. I’ve documented in many posts the issues holding back demand (See: Most Millennials won’t qualify for a mortgage until 2019, Imprudent student debt debilitates Millennial home shoppers, and Typical sources of housing demand largely absent)

The days of fog-a-mirror and get-a-loan are gone for good. The bigger question is whether or not the structural problems and adjustments are merely delaying the inevitable, or if there is a grass-roots shift in attitudes toward home ownership. I do believe the current generation won’t have the unbridled enthusiasm of the previous generation — thankfully — and they will be more cautious about buying,

which is a natural reaction to the carnage they witnessed, but ownership is primal, and no matter how bad lenders and government officials screw everything up, people will still want to own if it’s advantageous for them to do so, and probably even if it’s not.

With high prices and little prospect for the above-average appreciation the Baby Boomers experienced, owning a home isn’t a “must” like it was 30 years ago, so Millennials don’t feel much urgency. Also, with realtor credibility at less than zero, Millennials aren’t as easily duped by fantasies of boundless appreciation as previous generations either.

39 responses to “Is current housing weakness a fundamental shift away from home ownership?”