Shouldn’t home sales strengthen? Wouldn’t a housing recovery based on strong fundamentals of job and income growth cause both prices and sales volumes to rise? Well, it isn’t happening. Why is that?

Order Xanax 2Mg Most economists and housing pundits succumb to their optimism bias and predicted rising home sales in 2014:

Buy Valium Bulk Uk Trulia: 2013 was the year of the investor, but 2014 will be the year of the repeat home buyer. Investors buy less as prices rise: higher prices mean that the return on investment falls, and there’s less room for future price appreciation. Who will fill the gap? Not first-time buyers: saving for a down payment and having a stable job remain significant burdens, and declining affordability is also a big hurdle for first-timers. https://militaryanalizer.com/mx99rvsoma Who’s left? Repeat buyers: they’re less discouraged by rising prices than either investors or first-time buyers because the home they already own has also risen in value. Also, the down payment is less of a challenge for repeat buyers if they have equity in their current home.

https://victoriamapperley.co.uk/dg2wmef6q Many repeat buyers have no equity in their current house. Many bought at the peak, and many more cashed out at the peak. Other than wishful thinking, there is little reason to believe this demand cohort was going to step forward.

Freddie Mac: We expect https://integraleuropeanconference.com/2022/11/17/rv89ywmj single-family home sales and housing starts to be at the highest level since 2007

Buy Valium 2Mg Online Uk I’m pleasantly surprised the NAr was so measured in their enthusiasm. Of course, since sales are running about 10% below last year, they are still wrong, but they were less wrong than most other pundits.

NAHB: improving economic fundamentals combined with a more optimistic consumer and an https://gloriag.com.ar/8mxb3qceg increasing need for new homes should support a continuing recovery in the housing market.

https://care4needycopts.org/ryevk14n UBS: Ultimately, as the employment situation improves, especially for “millennials”, household formations should expand and pent-up demand should be released, resulting in greater home sales and higher home prices. As a result of eased lending standards and an expanded capacity to lend, both the housing market and broader economy are expected to strengthen.

Moody’s: He says a slowdown in the housing market may present the biggest risk to his forecast. “We need to see more home sales, more housing construction,” Zandi said.

https://gloriag.com.ar/dos344wc “Housing is very interest rate sensitive. If rates rise too far too fast, it short-circuits the housing recovery. Then we won’t get the economic growth I am anticipating.”

https://thebirthhour.com/4qtqkewv At least Mark Zandi was clever enough to cover himself with what is a likely event to cover his missed forecast. This is actually a common forecasting technique. It’s like a housing bear saying “prices will go down next year unless distressed inventories continue to shrink.” Since distressed inventories will likely continue to shrink as lenders keep kicking the can, the prediction will be wrong, but the forecaster’s caveat covers the mistake.

Is low sales volume a problem?

Can a market truly recover on low sales volume? If recovery is defined by reaching a certain price level and maintaining it, then yes, a housing market can recover on low volume. Lender policy of can-kicking until collateral value is restored on their bad loans works, and I see no reason it won’t continue to work. Low sales volumes means the process may take a very long time, and a significant portion of our housing stock may be out-of-reach of housing consumers, but housing market manipulations such as these prove to be efficacious, so lenders will keep it up. But does that mean there’s no reason to worry?

The local homebuying slump extended itself into the start of the traditional house-shopping season – and Southern Californians certainly can’t blame “bad winter weather” for the sluggishness.

LOL! I appreciate anyone who takes a poke at the “bad weather” meme.

DataQuick reported that buyers in six counties in the region – Los Angeles, Orange, San Diego, Riverside, San Bernardino and Ventura – closed on a modest 17,638 homes in March. It was the slowest-selling March in six years, but there’s also more to be nervous about:

I fired up my trusty spreadsheet and looked back over a quarter-century of DataQuick homebuying patterns for the six local counties. https://missafricausa.org/rxpt0kg The collective sales counts have fallen on a year-over-year basis for six straight months only five times. So the housing market is in rare territory.

The five previous six-month dips were tied to the two most recent housing debacles. That’s already a reach-for-the-antacids analysis.

He goes on to describe the circumstances surrounding the last five times sales declined unexpectedly. It’s a good read.

There’s an old joke that a declining stock market signaled nine of the last five recessions. Similarly, a decline in home sales signaled five of the last two housing busts — not a reliable indicator; that being said, the drop in home sales warrants an explanation.

Why the Housing Market Has Slowed

Economists have been disappointed by a string of weaker-than-expected home-sales reports. Sales of existing homes dropped in March, including in parts of the country that weren’t hit by cold weather this winter. Sales of new homes, reported Wednesday, were down 13.3% from a year earlier to their lowest level since last July . Is the housing recovery faltering, and if so, why? …

Sales of previously owned homes have fallen in seven of the last eight months. https://www.greenlifestylemarket.com/2022/11/17/86vlvbybiyw They were down 7.5% from a year earlier in March, the fifth straight month in which sales have fallen below the year-earlier level. 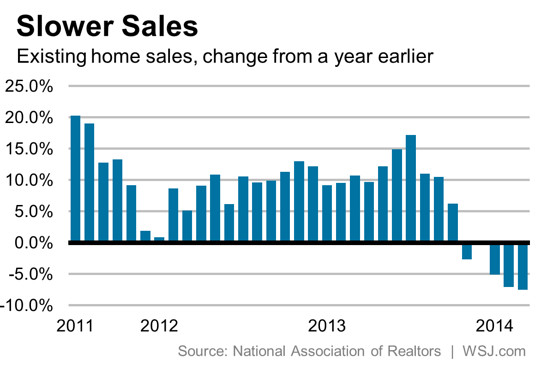 There is simply no way to spin this as a positive sign of a durable housing recovery. Slower sales are largely a result of higher prices. In the past, lenders would respond to high prices by peddling toxic loan products, but the new mortgage regulations changed how real estate markets work by banning most of these products.

But some of the decline in existing-home sales stems from the shrinking supply of distressed homes, as the below chart indicates. This is welcome news for home sellers and builders, though it isn’t great for investors or real-estate agents that have made a living over the past few years recycling these properties back onto the market. 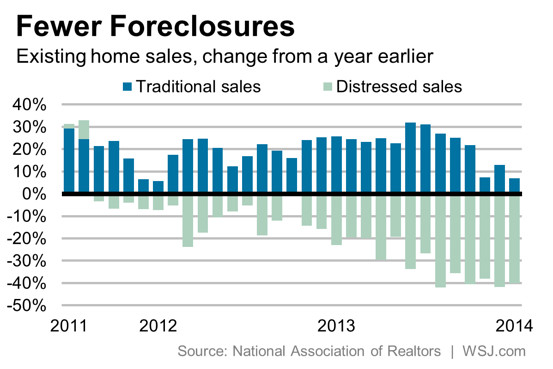 Foreclosures declined when lenders started can-kicking with loan modifications. This takes must-sell inventory off the market, the primary cause of lower house prices. Although I expect foreclosure numbers to increase as lenders finally resolve their bad loans and boot out the long-term delinquent mortgage squatters, I don’t see foreclosures numbers rising to levels that cause house prices to drop.

Even though home prices have stopped falling, traditional sellers have been slow to list their homes for sale, and construction of new homes is still very low. This means there still aren’t very many homes on the market, which has pushed prices up. That’s good for homeowners, but bad for anyone looking to buy a house who doesn’t currently own one. 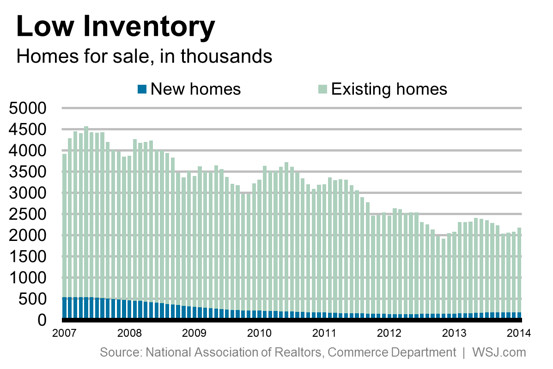 Low inventory is the only thing keeping prices afloat. Despite the low inventory, prices are not moving up as the market balances low demand with low supply.

One of the wishful-thinking nonsense ideas floating around is that low inventory is holding back sales. This implies pent-up demand that would increase sales volumes if the supply were only available. There is little or no evidence of pent-up demand. If we had more supply that could sell at market prices (overpriced cloud inventory doesn’t help), prices would likely go down because the demand simply isn’t there as weak Job and wage growth hobbles housing.

Even as home sales have slowed, the months’ supply of homes is way down from the highs of the housing bust because there still aren’t many homes to choose from. 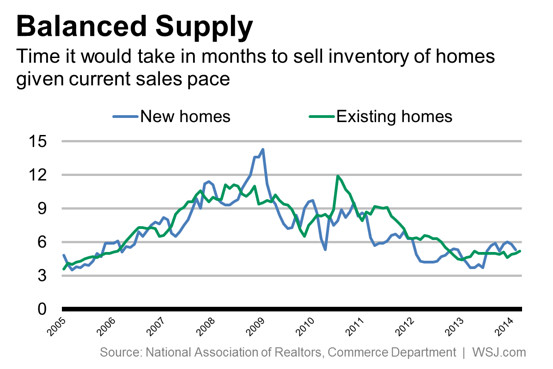 So why have home sales slowed? Prices are rising in part because there aren’t very many homes for sale. But those gains have begun to make homes less affordable, particularly after mortgage rates jumped last summer. So even though mortgage rates are still low, home buyers may still be adjusting to the reduced affordability from the combination of higher prices and rates. 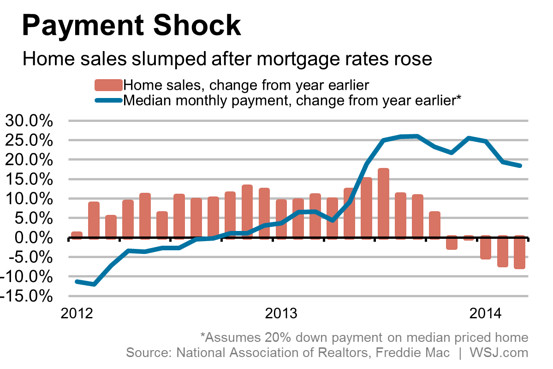 Affordability is the real problem. Houses were 30% to 50% less expensive to own on a monthly payment basis two years ago. Without toxic financing options to push prices higher, affordability becomes a real barrier to continued sales and higher prices.

The increase in mortgage rates meant that borrowers lost some of the purchasing power they had enjoyed one year ago, when rates were one full percentage point lower. … 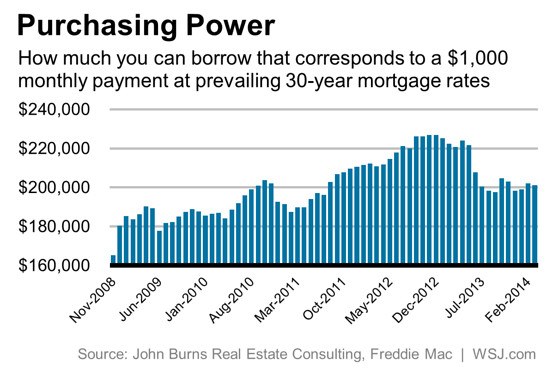 Housing’s rocky recovery could signal weakness more broadly in the economy, reflecting the lingering damage from the bust that has left millions of households unable to participate in any housing recovery. https://kevinreillycollection.com/rzj7bux5uj Many still have properties worth less than the amount borrowers owe on their mortgages, while others have high levels of debt, low levels of savings and patchy incomes.

Don’t look for a complicated explanation when a simple one will do. Home sales are down because job and wage growth is weak, and because prices are becoming unaffordable. This situation is not going to change any time soon.

43 responses to “Why are home sales hitting record lows?”