Over the last 40 years, California inflated three different housing bubbles. Starting in the 1970s with regulations like CEQA, California began to restrict growth. This inhibited builders and developers from bringing new product to market to meet demand in many areas. As a result, demand pressures caused prices to rise. Rather than react to rising prices as a deterrent to buying, the sudden upward price movements served as a catalyst for even more buying as homeowners became speculators hoping to cash in on rapid appreciation.

The housing bubble of the 1970s was inflated because lenders abandoned long-held standards for debt-to-income ratios. Prior to the housing bubble of the 1970s, lenders would only allow a front-end ratio (the percentage of income directly attributable to housing costs) of 28%. Further, lenders would only permit a back-end ratio (total debt service as a percentage of income) of 36%. These standards were completely abandoned during the 1970s because lenders reasoned that with 10% yearly wage inflation, a borrower’s onerous front-end ratio in the early years would become affordable after a few years of steadily rising wages. Of course, they were wrong.

The common denominator behind the previous housing bubbles was an abandonment of affordable debt-to-income ratios and the use of loan products that don’t amortize. Shockingly enough, regulators figured this out, and the new qualified mortgage rules specifically ban interest-only and negatively-amortizing loans. Further, these rules but a cap on debt-to-income ratios of 43%. This effectively eliminates the primary tools lenders have to inflate housing bubbles.

Lenders don’t set out to inflate housing bubbles. The pressures on lenders to obtain business prompts them to expand loan programs and develop “innovative” loan products in order to keep sales volumes up when prices reach the limit of affordability. Sellers could always rely on lenders to arm borrowers with dangerous loans to finance ever-higher asking prices. That will not be the case in the future.

The result of the new regulations will be a much more rigid ceiling on affordability. Borrowers will be required to document their income, and that income will be applied to amortizing loans with a reasonable debt-to-income ratio. They can either afford the property or they can’t. Their bids will be limited.

If borrowers don’t have the ability to raise their bids due to limits on financing, then future housing markets will be very interest rate sensitive. Rising interest rates will lower the affordability ceiling if salaries don’t rise to compensate.

As mortgage interest rates climb, the local bubbles that have quietly been inflating in a number of markets will reveal themselves.

Imagine global warming raises sea levels so high that all the land is underwater (remember the movie Waterworld?). This is analogous to lenders who created so much housing debt they put all homeowners underwater. Now imagine rising interest rates are like falling sea levels. Beneath the surface, volcanic islands may still be growing and plate tectonics is still raising mountains just like our efforts to reflate the housing bubble is raising values in some markets more than others.

Interest rates are a blunt instrument. Lenders can’t charge one rate in Coastal California that doesn’t need stimulus and another in Las Vegas that does. Interest rates will raise or lower the affordability ceiling everywhere, just like global warming raises sea levels everywhere. As the sea levels recede (interest rates rise), the areas nearest the surface will poke above the water and become islands. These islands will represent exposed housing bubbles.

Perhaps wave action and erosion will knock these islands down and prevent them from reaching the sky, but as long as the interest rate stimulus is being applied, and as long as inventory is overly restricted, there is always the danger of inflating an echo bubble.

Between 1985 and 2000, the monthly mortgage payment on a typical American home (after 20 percent down) represented about 20 percent of monthly median household incomes. By the end of 2012, that had fallen to roughly 12.6 percent. Thanks largely to a combination of a big dip in home prices during the recession and historically low mortgage rates, Americans were spending 37 percent less of their monthly salaries on mortgages at the end of last year.

That is the basis for a durable economic recovery.

But recently, mortgage rates briefly crossed the 4 percent threshold, and are expected to continue to rise, slowly but steadily. So we set out to discover those areas in which affordability will be most affected once mortgage rates hit 5 percent, 6 percent and 7.1 percent. The 7.1 percent threshold is the point at which homebuyers nationwide will be back to spending 20 percent of their monthly incomes on a mortgage payment.

This is a good analysis. Rising interest rates won’t pummel the national housing market. Houses are still very affordable. The impact will be seen first in the most inflated markets.

At current mortgage rates, on a monthly payment basis, the U.S. as a whole and all of the top 30 largest metro markets covered by Zillow are more affordable today relative to their historic norms.

That covers over 90% of the readers of this blog.

As interest rates rise, if wages don’t rise with them, the affordability ceiling will put pressure on house prices. Buyers today expect this rally to continue until prices double again. It’s entirely possible that rising interest rates will cause the best markets to pull back while the weaker ones catch up. That’s what the analysis at Fitch Ratings believes, and I concur with their analysis. 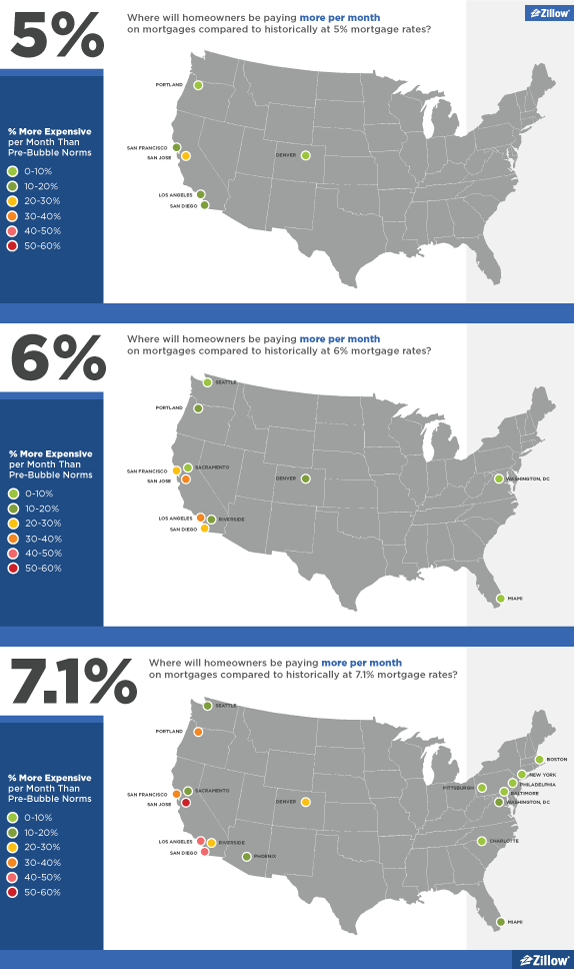 Yes, rates will remain very low for at least the time being. But it won’t be long before they climb back to 5 percent. Consider some historical context: The average 30-year fixed rate mortgage rate over the past 42 years is roughly 8.5 percent, according to Freddie Mac. In other words, rates of 5 percent or 6 percent should still be considered bargains, historically speaking.

And when (not if) they reach that point again, we’re likely to see price volatility, as consumers are forced to either spend more of their incomes to buy ever more expensive homes; or home value appreciation will stagnate or fall while waiting for incomes to catch up.

Since the new qualified mortgage rules ban debt-to-income ratios over a certain threshold, consumers won’t be given the option to spend more of their incomes on houses; therefore, home price appreciation will stagnate or fall for a while while incomes catch up.

I pointed out last week that Orange County real estate has rarely been cashflow positive. In 2006, it certainly wasn’t. Today’s featured REO was purchased as a cashflow property; however, since the loan was so large, the property was not cashflow positive, and the combination of declining values and negative cashflow wiped the former owner out.

The first NOD was filed in September of 2009, so the borrower wasn’t making payments at least three months prior to that. The property was finally sold at auction on 5/21/2013 about four years after. Did the owner make any payments during that time, or did he skim rents from this property to recoup is down payment?