Can the fed taper housing market stimulus with no ill effects?

The federal reserve has been printing money to stimulate the economy off and on for five years now. Prior to the housing bust, the federal reserve had never purchased any security other than a short-term US Treasury. In order to drive down interest rates and stimulate housing, the federal reserve printed $1.2 trillion to buy mortgage-backed securities, and when that proved insufficient, they increased their purchases by $40 billion per month on an ongoing basis. They are still buying.

The mere suggestion that the federal reserve might slow down it’s purchases caused a wild selloff in the bond market that drove mortgage rates from 3.5% to 4.5% in about one month. Clearly, nobody wants to be the bagholder when the federal reserve does stop buying.

The sudden rise in mortgage rates has everyone in the real estate industry scared about what will happen next. Reducing affordability suddenly and dramatically is bound to have an impact, though not that you would learn this from reading the flood of articles in the mainstream media telling us everything will be all right.

… The FOMC said at its most recent meeting it will continue buying $40 billion in mortgage bonds and $45 billion in Treasuries each month until the labor market “improves substantially.” The committee also pledged to keep the main interest rate near zero so long as the unemployment rate remains above 6.5 percent and the forecast for inflation doesn’t exceed 2.5 percent over one to two years.

So what happens when unemployment remains above 6.5% and inflation exceeds 2.5%?

Most participants in the June meeting expect that the Fed “would not sell agency mortgage-backed securities” that it already holds as it scales back quantitative easing, according to the minutes. The minutes didn’t reflect any discussion on whether tapering of asset purchases would concentrate first on either Treasuries or mortgage bonds.

… The importance of housing to the recovery may shape the initial tapering, said Jonathan Wright, an economics professor at Johns Hopkins University in Baltimore who worked at the Fed’s division of monetary affairs from 2004 until 2008.

I think we can all see the importance of the proper shape to the initial tapering….

“The center of the committee would probably like to taper Treasuries first, but it is a committee that likes to try to achieve consensus,” he said. “The motivation would be not to snuff out the rebound in housing. My guess would be they taper both but maybe a bit more on Treasuries.”

Several Fed presidents including Richmond’s Jeffrey Lacker, Philadelphia’s Charles Plosser and Dallas’s Richard Fisher, who have been skeptical of the effectiveness of quantitative easing, have urged that Fed move away from mortgage-backed securities because the holdings amount to targeting a particular industry.

It’s understandable that the fed would want to stimulate housing given the magnitude of the housing bust. That doesn’t make it right.

Since the are targeting specific industries for free money, perhaps they could print money and give it to bloggers? I would support that….

Has Fed killed housing and, with it, the economy?

Commentary: Higher home prices have been most positive development

But, most importantly, home prices are up. Higher house prices have all kinds of beneficial effects on the economy (as long as they don’t get bubbly, of course).

Complete and utter bullshit. Higher home prices are not a plus to the economy — stable and affordable home prices are. As home prices move higher, particularly if they move higher faster than wage growth, buyers are forced to pay more for housing. This takes money out of the economy that these owners would have used to buy other goods and services, and instead this money gets diverted to a bank for debt service. It makes the banks rich, but it impoverishes everyone else.

The increase in home prices over the past year is the best economic news the middle class has had in years. … 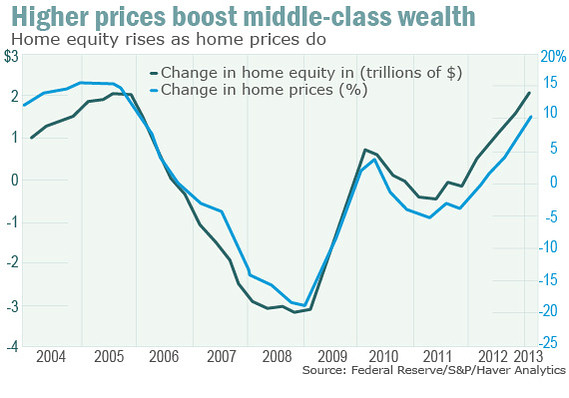 This graph was part of the original article. It is one of the worst and most misleading I’ve seen in quite some time. The graph was constructed to make it look like every dollar of increased home price translated directly to home equity. We know this isn’t the case because much of this increase went to collateral backing on underwater bank loans.

The creator of this graph used dollars to scale one line and percentages to scale the other. The percentage scaling was adjusted to make the two lines match. If both were in dollars, the lag in home equity caused by the replenishment of collateral value on an underwater bank loan would be apparent. It also wouldn’t tell the story the author wanted to tell, so it was intentionally drawn to be misleading. Shoddy journalism.

the housing recovery has been good for the bottom 99%, or at least the 66% who own a home.

The housing recovery has done nothing for renters. It has only benefited homeowners. It hasn’t even benefited loanowners because the rise in prices hasn’t provided them with any equity. That increase in value went back to the bank.

The extra wealth owned by the middle class has helped them maintain their spending in the face of the payroll-tax hike and sluggish wage growth. If spending had slowed at the same rate that income did, the economy would have grown less than 1% in the first quarter instead of 1.8%, and lots of people would be talking about the rising risk of recession.

So now we celebrate when people take on debt and spend faster than their income grows? This is a good thing?

What happened to saving money and spending less than you earn? Is this an old-fashioned and unsophisticated idea of rubes like me?

Homeowners with above-water mortgages have many more options. They can refinance easier, they can sell their home, and they may be able to take out home-equity loans to meet emergency needs, to repair and renovate their home to boost its value or to start a new business.

Or they can restart their personal Ponzi schemes like Bernie Madoff. Notice how the author tried to find noble and upstanding uses of HELOC money. Those are not the uses that people put the money toward.

Do we want to encourage Americans to take risks? Isn’t he really saying that he hopes that people will take their HELOC money and party like drunken debutantes?

Rising home prices make banks somewhat more willing to lend because they believe their loans will have collateral value in the future if they need to foreclose, but it does nothing to encourage them to lend to businesses or those who might actually stimulate the economy in positive ways.

Bernanke and his colleagues know how important housing is to the recovery. That’s why he promised that if higher rates begin to threaten the speed of the recovery, “we would have to push back against that.”

Tapering federal reserve purchases of mortgage-backed securities will threaten the speed of the reflation of the housing bubble. This must be bad news to loanowners who thought they would be above water soon.

She certainly stimulated the economy

The former owner of today’s featured property was a typical OC Ponzi. She represents the kind of behavior people want to see become prevalent again. She certainly stimulated the economy with her profligate ways.

45 responses to “Can the fed taper housing market stimulus with no ill effects?”