Measuring home price value requires a reliable metric and a reasonable benchmark. Most California markets are fairly valued — at least for now.

I recently wrote that Rental parity establishes the value of residential real estate, but others use different metrics to measure value and affordability. If the metric is price-to-income, today’s prices look inflated; if the metric is payment-to-income, today’s prices look undervalued. So which metric is correct? In my opinion, they both are. Over the short term, it’s impossible to ignore the payment-to-income ratio because it will establish the market equilibrium at any point in time; however, over the long term, it’s hard to ignore price-to-income because interest rates will revert to the mean, so the long-term price-to-income ratio will also come back into alignment.

Since the federal reserve drove mortgage rates down to record lows to prop up house prices and bail out the banks, the short-term equilibrium is much higher than the long-term equilibrium will likely support. Therefore, one of two things are going to happen: either prices will stagnate or decline in the future to correct for this short-term distortion, or wages will go up quickly to compensate for increasing ownership costs. If measured against inflation, either scenario produces weak financial returns, but nominal prices — the prices most people understand and focus on — will show gains, perhaps large gains if wages start to climb.

Is U.S. Housing Unaffordable? It Depends on How You Chart It 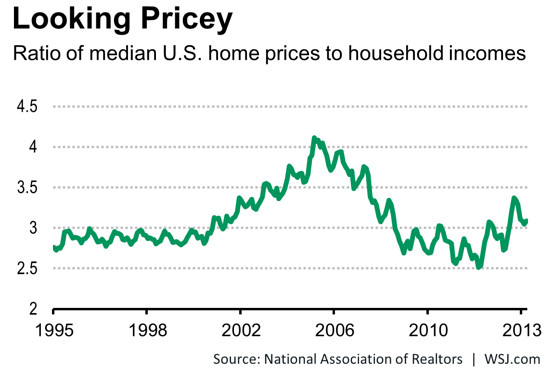 Before the housing bubble, median prices stood just under three times household incomes. During the housing bubble, they reached nearly four times incomes. After falling during the bust, prices have since rebounded, and they currently stand slightly above their long-run, prebubble average.

“Without a meaningful recovery in jobs and incomes, higher home prices now will, at best, temporarily reduce negative equity in existing mortgages at the expense of new homebuyers,” Mr. Albertson wrote in his report.

In other words, today’s homebuyers are assuming the bad debts of bubble-era homebuyers, hopefully under more stable loan terms. Does that make you feel good about being a homebuyer today?

Looking at the relationship between mortgage rates, prices, and incomes produces a slightly different picture. Because financing costs have been so low thanks to the Federal Reserve’s stimulus campaign, the monthly mortgage payment as a share of median incomes remains unusually low. On a payment-to-income basis, then, home prices still look undervalued. 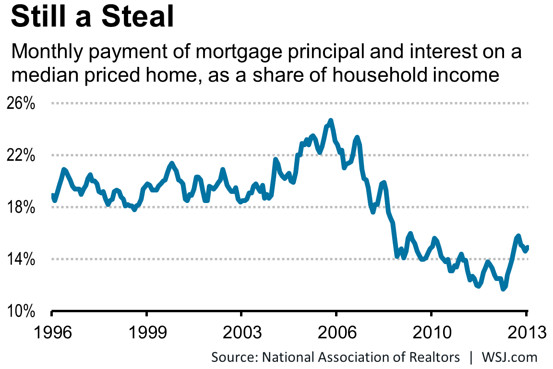 John Burns, a homebuilding consultant in Irvine, Calif., called into question the price-to-income chart in December in a report titled, “A picture: more misleading than a thousand words?” To conclude that home prices are overvalued, he wrote, “you would have to conclude that mortgage rates don’t matter.” He pointed to the payment-to-income chart as a better barometer of near-term housing affordability.

Both Messrs. Burns and Albertson share the same underlying concern: that low rates could ultimately boost prices to levels that would be unsustainable once mortgage rates rise above 6%.

I wrote about this phenomenon last September in What will a long-term rise in interest rates do to home prices?. The chart at the top showing price-versus-income is similar to the fundamental value line in the chart below, a chart generated by assuming a steady interest rate. The affordability chart above that charts monthly mortgage payments as a percentage of income is similar to the rental parity line in the chart below, which does account for changing interest rates.

So what determines value? Is it the fundamental value of income, or is it the current payment equilibrium jacked up by low interest rates?

… Interest rates must rise from about 4.5% to 7% to reach historic norms. If this happens over a 7 year period — which is a very gentle rise — rental parity will still fall from its current level even as rents and fundamental values rise. Since rental parity will serve as a more rigid ceiling on appreciation in the future, when prices rise beyond this barrier, it will serve as a major drag on appreciation.

Personally, I don’t see the rapidly rising wage scenario happening; we have too many unemployed for rapid wage gains. In my opinion, the more likely scenario is a slow grinding correction as rising interest rates take the air out of the reflation bubble.

I am also of the opinion that we are not currently in a housing bubble in California; however, a spring house price rally may inflate new housing bubble if prices start rising rapidly again. So far it looks like the spring house price rally may be called off due to affordability problems, but it’s only early April, so we have three more months to witness higher demand driving higher prices.

I may not be correct in my assumptions about current valuations. Ted Kolko from Trulia says Southern California is already overpriced.

Real estate website Trulia ranks Orange County, Los Angeles and the Inland Empire among the five most overvalued housing markets in the U.S.

Southern California is home to some of the most overpriced housing markets in the country. And that’s taking the wind out of the recovery.

Three Southland regions ranked among the five most overvalued markets in the U.S. in a new report by real estate website Trulia. These are places where the housing costs have far outpaced growth in income. …

House prices have certainly risen sharply. Orange County house prices on a per-square-foot basis are up over 20%.

Rent, which is a proxy for income, was up less than 4%.

… If a new housing bubble is forming, he wrote, it will form here first.

But Kolko was quick to note that the picture is a lot better today than it was in 2006. “This is not the edge of a cliff,” he said.

Coastal California housing markets will be very interest rate sensitive. It’s very difficult for builders to add more housing stock in Coastal California due to a variety of constraints, so when prices rise rapidly, supply is slow to market to blunt the increases. If any location is likely to show the adverse effects of a reflation bubble, it’s right here.

“The test this year will be whether regular people looking to buy homes for themselves can pick up the slack from investors,” he said. “Ultimately that depends on how well the economy does.”

Institutional home buying abruptly tapered off this year, and so far owner-occupants haven’t stepped up. In fact, purchase applications hit a 19 year low. as the much anticipated boomerang buyers failed to materialize.

The reflation rally of 2012 and early 2013 abruptly ended when mortgage interest rates spiked. Prior to that rally, house prices were undervalued across much of the country, including Southern California. Few analysts who can be taken seriously are claiming house prices are still undervalued (the NAr doesn’t count). The debtate today is whether or not the market is fairly valued or overvalued, and the answer to that depends on the metric you use to determine value. A good case can be made for both.

22 responses to “Are California house prices fairly valued or overvalued?”