Americans borrow more money for consumption rather than the acquisition of assets.

Not all credit card debt relief is created equal. I borrowed large sums to buy cashflow properties in Las Vegas, debt backed by a cashflow-producing asset. The income stream repays the debt with interest, and if for some reason I am unwilling to pay back the loan, the lender can auction the property and either receive their money back or obtain cashflow equal to or greater than the payment on the debt. That is asset-backed debt.

Lenders provide asset-backed debt for the purchase of property, plant, and equipment. When lenders evaluate these loans, they consider the useful life, the recovery and resale value, and the cashflow the asset may generate (if any).

Asset-backed lenders assume the debtor’s word means nothing and any recovery of capital will come solely from the collateral pledged to cover the loan. In this world, there is no signatory disinfection services of repayment, only collateral repossession, cashflow, and resale.

Asset-backed debt is essential to the functioning of our economic system. Many businesses could not raise the equity to obtain the property or equipment necessary to its operations. Lenders can loan against working capital at very low rates with little risk. If businesses free up their money, they grow the business, and our economy grows and prospers. In short, asset-backed debt is useful and freeing.

The problem with signatory debt is simple: people don’t want to keep their promise to repay when it is inconvenient. Ponzis live to consume. They will take money under any terms offered, and when it comes time to pay the bills, they will seek more borrowed money to keep the system going. Borrowing money to repay debt is the essence of Ponzi living.

Ponzis inevitably spring from signatory debt. Not everyone who borrows with no collateral is a Ponzi, but Ponzis could not exist without signatory debt. A lender’s only deterrent to providing unlimited debt growth, and thereby unlimited economic growth, is the losses created by Ponzis.

Our current home mortgage lending system backed by the government, and without strict controls, Ponzi borrowing with home loans is inevitable, which is why I diligently report on burgeoning mortgage equity lending.

Lenders conflate the distinction between asset-backed debt and signatory debt by over-loaning on assets. The housing bubble is a classic example, but lenders do this with car loans, commercial loans, and personal property loans.

A home loan has a component of asset-backed debt. The portion of the cost of ownership (payment, interest, taxes, insurance, HOA) equal to rental is asset-backed. If the loan balance is limited the size supportable at rental parity, the property could be rented for an income stream capable of sustaining the debt service.

However, once the cost of ownership exceeds the cost of a comparable rental, the only assurance the lender has of getting repaid is based on the signatory promise of the borrower. Therefore, the loan is part asset-backed and part signatory. When lenders cross the line from asset-backed to signatory debt, they turn good debt into evil debt and inflate asset bubbles. Lenders did this in both the residential and the commercial real estate markets during the 00s.

Once lenders cross the line from asset-backed debt to signatory debt, they are inflating an unsustainable Ponzi scheme. Inevitably, prices will crash back to asset-backed levels determined by rental parity. it’s not a matter of if, only when, as we witnessed when the housing bubble burst.

Our economy is finally pulling out of its decade-long malaise. Unfortunately, a growing portion of this expansion is built on the unstable foundation of increasing signatory debt.

Americans now hold an incredible $4.1 trillion in consumer debt.  This latest data shows that Americans are now back to having an insatiable appetite for spending beyond their means.  Unlike mortgage debt, consumer debt is not building up any future equity here.  The largest category of consumer debt is student loan debt.  Even at the peak of the last debt bubble, consumer debt totaled roughly $2.5 trillion.  While student debt makes up about $1.4 trillion of the consumer debt here, auto debt is above $1 trillion.

It can be argued that student loan debt is actually asset-backed debt because the borrower is investing in their own mind. However, what happens when the knowledge this borrower accumulated turns out to be worthless? What happens when they fail to get a degree, or they obtain a degree that doesn’t lead to a high-paying job?

The entire principle behind asset-backed debt is that the debt acquires an asset of greater or equal value. Student loans often fail to meet this standard. Without a cost-benefit analysis applied to student loan debt, and without a backup plan if the borrower fails to obtain a degree, student loan debt becomes signatory debt — except that the borrower can’t extinguish this debt in bankruptcy. It truly becomes debt slavery.

We’ve also seen a large rise in subprime auto debt suggesting that people are borrowing beyond their means to consume.  Delinquencies are also rising suggesting any tiny slip up in the overall economy and this credit bubble can burst too.

Subprime auto loans are clearly a bubble. Lenders piled in because the new chip that disables cars provided a stronger incentive to repay and greatly reduced the cost of repossession. As with any debt expansion, lenders provided too many loans to risky borrower pools, and now, despite the chips, the deadbeats decided not to pay.

Americans are now borrowing and spending at record levels.  This would be fantastic if incomes were keeping up but many are trying to keep up with the Joneses by spending future income via consumer debt.  This chart sums up the desire to spend: 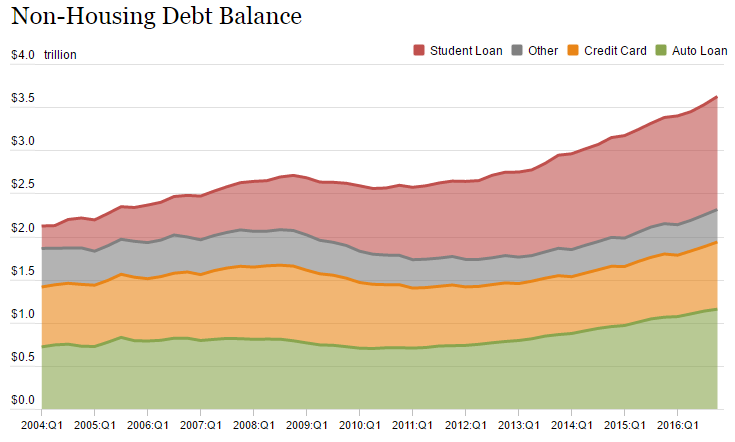 Showing signs of weakness we have over 10 percent of all student loan accounts being delinquent by 90 days or more.  And this is the largest consumer debt segment.  Auto debt delinquencies are also rising suggesting people are having a tough time paying their car loans. …

Banks are more comfortable lending money now that we are 10 years passed the excess of 2007.  The Great Recession officially ended in 2009 and while banks have had generous bailouts, it appears that American consumers are being bailed out via access to debt.  If we take a tiny trip down memory lane, we will remember that solvency was the issue during the last credit bubble.  People took on too much debt relative to their ability to pay.  The amount of consumer debt being issued is troubling to say the least.

It also underscores why we need the economy to run hot for a while. We need wage inflation to provide borrowers the capacity to repay these debts, and we need monetary inflation to reduce the value of the currency they will use to repay it.

While auto debt and credit card debt can be discharged via bankruptcy, student debt cannot.  That is very significant.  Many younger Americans are being put into a new form of debt serfdom through going to college and taking out mini mortgages that they simply cannot pay back.

Here is one of many horror stories when it comes to student debt:

I think we are just beginning to see how crazy this is going to get. If my math is correct, in ten years there are going to be a lot of impoverished people, people making less than $20,000 a year, who have these ludicrous million dollar debts.

My heart about exploded when I got the letter saying I owed $75,000. After I recovered, all I could do was laugh. It is so absurdly much that they might as well have told me that I owe a million bucks, and now, upon further reflection, it appears they will be telling me I owe them a million bucks in the not so distant future.

I wonder if people with unpayable student loan debt will due to accumulated stress, loss of work, and an inability to pay for medical needs in old age, have on average shorter lifespans than those who do not? This will make an intersting study in fifty years.”

So an original debt of $25,000 has ballooned to $75,000 in eight years.  Why?  Because the debt compounds with interest and charges are put upon charges.  Of course if someone cannot pay, you see how comical the situation can get in a macabre sort of way.  You can read other stories here.  Does this even sound like a good situation to put young and older Americans into?

Consumer debt being over $4.1 trillion is troubling when student debt, auto loans, and credit cards are leading the way forward.  Apparently we like repeating history and people may like to forget that at the root of the Great Recession was a giant credit bubble.

Realistically, we need inflation. Most people carry too much debt. Millennials strain under the weight of excessive student loan debt. Generation X struggles under the weight of their bubble-era mortgages. And even the Boomers carry far too much consumer debt into their retirement. This debt will never be repaid in today’s dollars, so inflation benefits far more people than it harms right now.

20 responses to “Americans increasingly accumulate the wrong kinds of debt”

If you live in a suburb of one of America’s major cities, you’re most likely familiar with the idea of a McMansion: a sprawling, often architecturally mishmashed home boasting several thousand square feet.

As the American economy suffered the effects of the 2008 subprime-mortgage crisis, however, photos of foreclosed McMansions in subdivisions across the US served as reminders of what could happen when people try to live beyond their means.

Now, as Americans’ attitudes toward conspicuous consumption have evolved in the wake of the recession, the suburban McMansion as we’ve come to understand it could be on its way out.